It was the first appearance for JDs Mammoth Dancer on the Indiana Sired Fair Circuit (ISFC) Monday, Aug. 3 at the Shelby County Fairgrounds. The two-year-old filly made the trip worthwhile for her connections as she fought to the finish line for the win in a division of the ISFC for freshman pacing fillies. 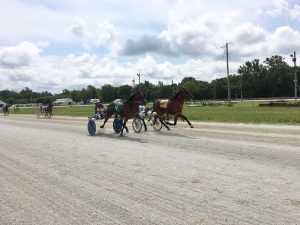 Driven by Chris Hope, JDs Mammoth Dancer came into the race off four starts at Harrah’s Hoosier Park. Her lines showed miles in 1:55 and change so it was no surprise when the Panspacificflight filly scored a victory in the final division for two-year-old fillies.

Starting from the second tier in post six JDs Mammoth Dancer had to wait until the field got settled behind Tellitlikeafra and Clifton Bell through early fractions of :31.4 but by the time the field reached the half in 1:03.0, JDs Mammoth Dancer was out to challenge. The filly had to work to get the lead away from Tellitlikeafra in the stretch and then had to contend with a fast closing Mel’s Vicki Lou and Joey Putnam in the final strides. But the Pasko Vucinaj filly prevailed for the win by a neck over Mel’s Vicki Lou. Tellitlikeafra finished third in the mile clocked in 2:03.0.

Owned by Caleb Miller of Shipshewana, Ind., JDs Mammoth Dancer was making her fifth career start. She was bred by Jacob Miller.

The quickest division for two-year-old pacing fillies went to Electrocuted and Don Eash. The Riggins filly led from gate to wire, scoring the win in 2:01.4 by one and one-half lengths over Cruisin Pearl and Bradley Ferguson. Meadowbrook Lady and James Reed finished third. Owned by Eash Racing Stable, Electrocuted also earned her first career win in her fifth start.

Other freshman pacing filly winners included Vel Edith and Mike Peterson in a time of 2:03.3 for trainer Larry King and Always a Miracle and trainer-driver Matt Rheinheimer in 2:02.4.

Some big miles were also on the card when two-year-old pacing colts and geldings took the track. The first three divisions were won by dominant winners with Lil Joe III and Anthony Gray taking the first division in 2:02.1. Ultimaroca and Charlie Conrad were also gate to wire winners in 2:00.4 before Jet Ace and Don Eash earned a comfortable win in 2:02.0. The fourth division was a little closer at the finish with Big Gulp and Jay Cross meeting up with This Kit Rocks and Joey Putnam.

Big Gulp has been impressive all season, coming into the race with three wins in three starts. The Always A Virgin gelding rolled out to the lead for trainer-driver Jay Cross and established the tempo. Coming around the final turn, This Kit Rocks came up to challenge and Big Gulp got a little rough coming out of the turn and lost a few strides as This Kit Rocks took off for the finish line. However, Big Gulp came back strong in the stretch for the win in 2:00.1. This Kit Rocks finished a length back in second followed by Go Randy Go and Mike Peterson for third.

Big Gulp is owned by Ann, McKenzie and Ben Yoder of Goshen. The freshman gelding is now four for four lifetime.