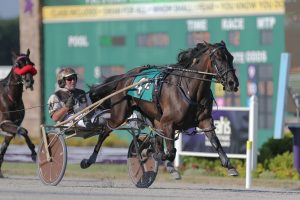 Jazzy Image began her journey from post six and went straight for the lead, but didn’t achieve her goal until after the quarter in :27.2 as Oneida Blue Chip and Jim Meittinis reached the marker first on the inside. From that point home, Jazzy Image had complete control of the race, pacing home in :28.2 for the one and three-quarter length win over Oneida Blue Chip. Rock N Roll Rosie and Ken Holliday rounded out the top three finishers.

Owned by Trent Stohler Stable Inc. and trained by Stohler, Jazzy Image was the favorite of the field, paying $3.40 for the win. The six-year-old mare was bred by Lavon Miller. She was a $25,000 yearling purchase from the Hoosier Classic Yearling Sale in 2015, initially purchased by Diane Reeser from In Law Stables.

Stohler acquired her through a private purchase in the fall of 2017. She has won races from Woodbine in Canada to Pompano in Florida and points in between. Jazzy Image now has in excess of $241,000 and a mark of 1:51.1 taken earlier this season for Stohler.