Jamie Macomber, one of the top trainers at Harrah’s Hoosier Park, was the featured trainer in the July issue of “Hoof Beats.” Macomber was the focus of the “Trackside With” feature of the magazine. 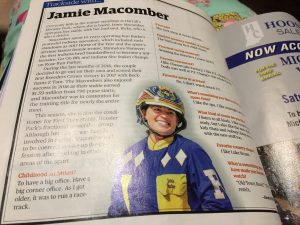 Jamie Macomber was the featured trainer for the “Trackside With” segment in the July issue of “Hoof Beats.” Macomber talks about branching out on her own in 2016 and some of her personal preferences with music and dining.

Macomber, who ran the Ron Burke Stable in Indiana for more than a decade, branched out with her own stable in 2016. Since that time, she has scored a Breeders Crown win with Beckham’s Z Tam and earned a leading trainer title at Harrah’s Hoosier Park. Macomber, who is the daughter of Tim and Debbie Rucker, grew up in Ohio racing before attending college at Ohio University, graduating with a degree in marketing. She was the first marketing director at Indiana Downs when it opened in 2002 and made the career move into training a few years later, taking over the Burke string of horses in Indiana.

Macomber has held a Standardbred trainer’s license since 2001. To date, she has won 377 races and more than $4.7 million in purse earnings. Her best year to date was in 2017 when she scored 126 wins and more than $2 million in purses. She is currently among the top five trainers at Harrah’s Hoosier Park in 2019 and is a great advocate for the sport, always keeping her barn door open for group tours and barn visits to the public. Macomber is also the trainer of the First Turn Stable horse for the second year in 2019.

Macomber and her husband, Ricky, have been dividing their time between Indiana and Florida in recent years. They have two children, Nate and Aubrey, and reside in the Fishers, Ind. area.