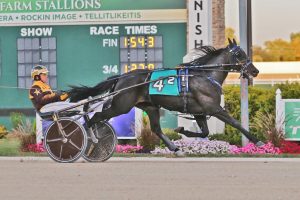 Jailhouse Dance went into the race as the favorite. He got away in mid pack as You Know Me and Richard S. Finn set the first fraction of :27.3 before being overtaken by Every Day Dan and Robert Taylor at the half in :58.0. This prompted Jailhouse Dance to the outside and the gelding took over at the three-quarters in 1:27.0.

In the stretch, Jailhouse Dance was gone, opening up to four and one half lengths and extending that lead to five and three-quarters at the wire in 1:54.3, a final quarter in :27.3. Every Day Dan finished second and Brookview Darius with Atlee Bender finished third. It was a new lifetime mark for Jailhouse Dance.

Jailhouse Dance is owned by Ken Rucker, Rock and Roll Stable Inc., and Michael Shan. Rucker trains the Dover Dan son, who was bred by Lester Beechy. The colt sold last fall under the name Woodside Gusher for $18,000.

Jailhouse Dance has a half sister named Woodside Hallie selling in the Hoosier Classic Yearling Sale this year. The Swan for All filly sells as Hip No. 2 in the sale under the Woodside Farm consignment. She is the third foal from the mare, Jailhouse Diva, who is a half sister to the great Measuredperfection, winner of more than $347,000 with a mark of 1:53.1.

Another impressive winner in two-year-old colt and gelding action for Indiana Sires Stakes was Talent Scout. The Swan for All gelding, driven by Dexter Dunn, led gate to wire to win by three and three-quarter lengths in 1:56.2, a final quarter in :27.3. Ahadi AS and Tony Hall finished second over Cincinnati Help and James Yoder for third.

Talent Scout is trained by Doug Rideout for Julie Rideout, Dr. Alan White and Dave Gamble. He was bred by Atlantic Trot Inc. and Steve Stewart and sold at the Lexington Select Yearling Sale last fall.

Texsong Soprano and John DeLong closed out the two-year-old trotting colt and gelding action with a win in the third and final division. The Text Me colt got away second early on behind Mohatu AS and Tony Hall before getting shuffled slightly.

In the stretch, Texsong Soprano found the racing room he needed and trotted home in :27.0 for the win by a neck in 1:54.4. Bourbon Courage finished second for Trace Tetrick over Mohatu AS for third.

Joe Yoder and Daryl Yoder own Texsong Soprano. He paid $11.40 for the win. Abraham Miller bred the colt.