Jack Kieninger, former president of the Indiana Standardbred Association and recipient of the Sagamore on the Wabash earlier this year, is featured in an article in the June issue of “Hoof Beats.”  The story, featured on page 38 of the magazine, was written by Megan Arszman, marketing and communications manager for the Indiana Horse Racing Commission. 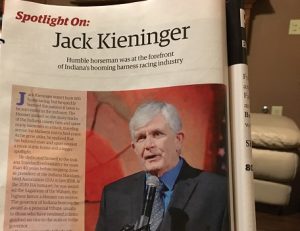 Jack Kieninger is featured in the June issue of Hoof Beats. The former ISA president talks about racing in the Hoosier State and his optimism for a bright future.

Kieninger talks about his introduction into horse racing at a young age and some of the highlights he experienced while both racing and working with the ISA. He also pointed out some highlights thus far, from finishing second in the inaugural race at Harrah’s Hoosier Park on Sept. 1, 1994 to being part of the 2017 Breeders Crown at the track.

Kieninger ended his interview about the future of racing in the state of Indiana. He has a lot of optimism for the continued growth of the industry and is excited to see what new chapters are written in partnership with Caesars Entertainment.