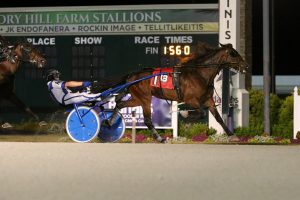 Starting from the inside post one, Udell utilized the good positioning early and rallied out to the lead at the quarter in :28.0 before Pretzel Party and John DeLong overtook the leaders, cruising through middle fractions of :57.2 and 1:27.0. In the stretch, J-S Miss Carly made another attempt at the leaders and was successful late in the stretch, winning by one length over Deswanslittlelorie and Michael Oosting in a time of 1:56.0. Pretzel Party finished third.

Earlier in the evening, Colin N Down and Brandon Bates were winners in the $21,600 Carmine Fusco Memorial. The six-year-old Articulator gelding, owned and trained by Jennifer Redmond, picked up the title in a time of 1:52.3, nearly four lengths ahead of Double Impact and Trace Tetrick and Backup A and Sam Widger.

Also on the card was the $18,000 final of the Cardinal for trotters. Bluebird Deacon and trainer-driver Jay Cross didn’t disappoint, taking the title by three and one-quarter lengths in a time of 1:56.1. Swan Legacy and Dan Shetler finished second over All the Stars and Ricky Macomber Jr. for third.

Bluebird Deacon is owned by Panic Stable and was bred by Daryl Miller’s Blue Bird Meadows Farm. The three-year-old Swan for All gelding is now two for two in his career after not racing at two. His win in the Cardinal also established a new lifetime mark.