To say J-S Jasper has been nothing short of brilliant in the Indiana Sired Fair Circuit (ISFC) the past two years would be an understatement. The three-year-old son of Big Stick Lindy capped off his sophomore campaign on the ISFC trail with a win in the $20,000 Governor’s Cup Championships, completing a clean sweep of the series as both a two and three-year-old. 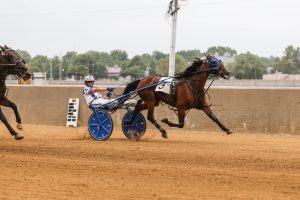 J-S Jasper and Alex Udell cross under the finish line for the win in the sophomore trotting colts and geldings ranks during Governor’s Cup Championships at the Indiana State Fairgrounds. Photo by Dean Gillette

Trained and owned by Jack Myers, J-S Jasper entered his final ISFC event Thursday, Sept. 10 at the Indiana State Fairgrounds in the three-year-old colt and gelding trotting final as a winner in all six of his starts on the circuit in 2020. He was second in the standings only behind stablemate J-S Ivan the Great in points with the latter competing in 10 of the events to earn 347 points total to J-S Jasper’s tally of 306.

With two horses in the final, driver Alex Udell opted to drive J-S Jasper with Dan Shetler picking up the lines behind J-S Ivan the Great. J-S Jasper was ready to roll when the gate folded, getting right out on top to set all the fractions of :30.0, 1:00.2, and 1:29.3. He had Jekyil N Hyde and Jay Cross sitting right at his back the entire way and in the stretch, felt the challenge from behind him. J-S Jasper held strong, completing the Governor’s Cup Championship in 1:58.2, winning by a neck over Jekyil N Hyde. Andy Over and Track Tetrick finished third.

Bred by Ben Wittmer Jr., J-S Jasper earned his eighth win of the year in 12 starts. With nine wins as a two-year-old, the three-year-old gelding now has 17 career wins in 26 career starts. He was also the winner in the ISFC Championship at two, increasing his career earnings to more than $67,000. His career best time remains at 1:56.3 taken last year as a two-year-old although he was timed earlier this season in 1:54.3 at Harrah’s Hoosier Park.

J-S Jasper was only one of six foals by Big Stick Lindy sold at public auction as a yearling. He was a $5,200 purchase by the team of Myers and Udell at the Michiana Classic Yearling Sale, selling under the name of Jasper Dream before taking on the stable name of J-S Jasper.

In other three-year-old Governor’s Cup Championship action, Ivanna Ivy and Logan Loney were surprise winners in the three-year-old filly pace. The Jereme’s Jet filly started from post eight and trailed the field as Baby Lets Roll and Joey Putnam set fractions of :27.2, :57.2 and 1:25.3. Loney began to move Ivanna Ivy up in third over fashion and in the stretch, went to work on the filly, timing the stretch drive just right for the win by a neck over Tropical Tracey and Tetrick. Baby Lets Roll was moved down to third.

The time of the mile was 1:55.2, which was just a tick slower than Ivanna’s Ivy’s win earlier this year at the Indiana State Fairgrounds. The filly now has five wins in 21 starts under the direction of trainer Donna Loney for owner James Reed. She increases her career bankroll to more than $35,000 with the win in the Governor’s Cup Championship.

In the three-year-old pacing colt and gelding ranks, Vel Charlie and Jay Cross brought in a win for King Racing Stable. The Straight Shooting sophomore sat in third most of the mile as Moneylikeitis and Andy Shetler established the pace at :28.2, :58.3 and 1:27.2.

In the stretch, Cross tipped Vel Charlie out for the drive home, putting up a final panel in :27.0 for the win by one and one-half lengths over Moneylikeitis. Topville Rustler and Mike Peterson finished third in the 1:55.0 mile.

Vel Charlie, bred by Alvin Schwartz of Schwartz Boarding Farm of Berne, Ind., earned his fourth win of the season. He now has in excess of $29,000 in earnings for trainer Larry King.

Rounding out the three-year-old Governor’s Cup Championships was a win by Just for Us, the top point leader of the three-year-old trotting filly ranks. Owned and trained by Bonnie Mattingly, the Guccio filly drew the perfect spot in post one to move straight to the lead for driver Charlie Conrad. Setting fractions of :29.2, 1:00.2 and 1:30.2, Just for Us made it difficult for her opponents to close in late in the race, winning by one length over DC Anna and Joey Putnam in 1:59.2, a new career best time. Quality in Motion and Robert Taylor finished third.

Just for Us earned her fifth win of the year and 13th overall. Bred by Marlin Eash of Shipshewana, the $7,000 yearling purchase from the Hoosier Classic Yearling Sale now has more than $42,000 in career earnings.