J-S Hopscotch and Voluptuous Swan earned titles in the featured Maple City Trot to close out the three-day racing sessions at the Elkhart County Fair Tuesday, July 27. J-S Hopscotch earned the top spot among sophomore trotting colts and geldings while Voluptuous Swan scored the win in the trotting filly division. 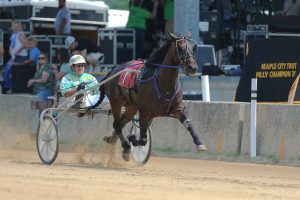 Voluptuous Swan, driven by Jay Cross, got away third in the $11,600 division for fillies with SJ’s Edith and Alex Udell and Heres Devotion and Doug Rideout going to the lead to post the quarter in :30.1. From there Here’s Devotion led the way through middle fractions of 1:01.4 and 1:31.4 before Voluptuous Swan began to ease up on  the outside to challenge.

At the head of the stretch, Cross tapped Voluptuous Swan a couple times and she took off, posting a seven and one-quarter length win at the finish line in 2:02.0. Heres Devotion finished second over SJ’s Edith for third.

Voluptuous Swan is owned by Platinum Stables and trained by Mervin Schmucker. The Swan for All filly was bred by JL Benson Stables Inc. It was her first win of 2021 in 12 starts and her first on the Indiana county fair circuit. Her career best time was taken as a two-year-old in 1:59.4.

J-S Hopscotch completed his win in the final race of the day in the colt and gelding division of the $11,600 Maple City Trot. Driven and trained by Melvin Schmucker, J-S Hopscotch never saw the rail, starting from the outside post six. The Mr Web Page gelding sat outside near the back of the pack and when he couldn’t find a hole, he sat patiently toward the back. Jessies Outlawed and Alex Udell had the first call at the quarter in :30.1 but were challenged by SJ’s Star’s Man and Clay Craib during the first three-quarters of the race from the outside. J-S Hopscotch moved up to get into position and moved three wide around the final turn to prepare for the stretch drive. 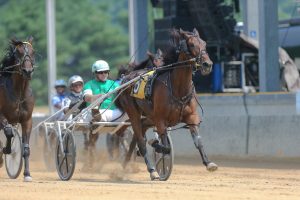 J-S Hopscotch and Melvin Schmucker dug in gamely for the win in the colt and gelding division of the Maple City Trot Tuesday, July 27 at the Elkhart County Fair. Photo by Dean Gillette

Once in the lane, J-S Hopscotch dug in gamely and fended off Southern Swan Man and Jay Cross to win by one-half length in 2:03.1. Major Hooligan and Don Eash finished third.

J-S Hopscotch is also owned by Melvin Schmucker, who purchased the gelding from the Midwest Mixed Sale last winter through the Jack Myers Dispersal group in the sale. He was purchased for $10,000. It was his second win of 2021 for Schmucker in seven starts and he now has earnings in excess of $34,000.