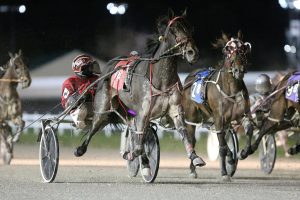 It’s Time for Fun and Kyle Wilfong are shown winning the Indiana Sires Stakes championship in 2018 at Harrah’s Hoosier Park. The duo has won two of three for 2020 so far this season. Photo by Dean Gillette

Starting from post five, It’s Time for Fun got away in mid pack as there was a lot of action up front early on. Tempus Seelster and Travis Seekman were the eventual leaders and continued the tempo through three-quarters in 1:24.0. By this time, Wilfong had It’s Time for Fun out and moving toward the leaders.

In the stretch, It’s Time for Fun began to pull away from the field, scoring the win by four and one-quarter lengths with a final panel in :26.4. Look Kimbo and Cordarius Stewart finished second over Tempus Seelster for third.

It’s Time For Fun is owned by Lynn Wilfong and trained by Brett Wilfong. The homebred mare is now two for three in 2020 and the winning time of 1:51.3 matched her career best taken at three at Harrah’s Hoosier Park. In all, It’s Time For Fun now has 14 career wins in 48 career starts with earnings in excess of $257,000.