It’s a Herbie, the standout trotter from the Verlin Yoder Stable, was a winner during qualifying action at Gil Crest Training Center Saturday, April 25. The four-year-old son of Here Comes Herbie trotted home in :28.2 for the win in 2:02.0. 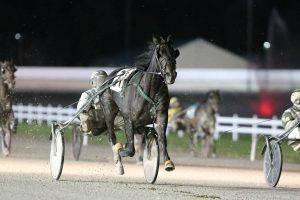 Yoder placed It’s a Herbie right on the back of his other entry in the race, Compelling, who was driven by Krista Harmon. Compelling, a six-year-old daughter of Swan for All, carved out fractions of :32.4, 1:00.3 and 1:33.1 before It’s a Herbie swung to the outside and trotted home as a one-length winner over Compelling.

Owned by Yoder, It’s a Herbie moves into this season with more than $400,000 on his card and a career best time of 1:54.0 taken last year at Harrah’s Hoosier Park. It was his first start of 2020 in the qualifier.

Compelling is equally impressive. The mare, also owned by Yoder, has in excess of $200,000 in earnings with a career best time of 1:52.0 taken last year at Harrah’s Hoosier Park.