Two powerhouse trotters met up for the first time this season in the second division of Indiana Sires Stakes Thursday, Sept. 6 at Harrah’s Hoosier Park. The three-year-old colt and gelding trotters were ready for action in the sixth leg of the series featuring Swandre the Giant and It’s A Herbie. 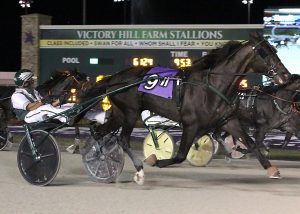 Its A Herbie and Verlin Yoder, shown winning an earlier leg of Indiana Sires Stakes, scored another win Thursday, Sept. 5 in the series. Photo by Linscott Photography

Lining up behind the Todd Nixon starting gate, It’s A Herbie went of stride for a few steps at the head of the stretch. Verlin Yoder got him back on his stride, but the misstep kept him from showing early speed. Swandre The Giant and Ricky Macomber Jr. sped out to the lead to establish the tempo, putting Swan on a Mission and John DeLong at their back. It wasn’t until the field was moving in the final turn that Yoder got It’s A Herbie moved up into contention on the outside.

In the stretch, Swandre the Giant continued to lead the way and It’s a Herbie was wide. It took the entire length of the stretch for him to catch the leader, but It’s A Herbie did, winning the race in 1:54.1. Swandre the Giant was a dominant second over Wow Lester for third.

Owned and trained by Yoder, It’s A Herbie is now seven for eight in his career. His only defeat came in the first round of Indiana Sires Stakes action when he finished second. The $46,500 purse boosted the Here Comes Herbie’s bankroll to more than $145,000 for the year and upwards of $385,000 lifetime

Earlier in the evening, heavily favored Martini Show and Sam Widger pulled in a win after finishing second in his last four starts. Owned by Jeff Cullipher, the Swan for All colt earned the win in 1:54.3 by three-quarters of a length over Sign Here N Here and Brandon Bates, the only horse to defeat It’s A Herbie this season. DG’s Caviar and Andy Shetler finished third.