American Girl, who made her last start April 5, 2019 at Miami Valley Raceway, is a new mother. The Art’s Chip mare, who is now 11, had a filly Friday, April 10 at Ruddick Stables in Scipio, Ind. 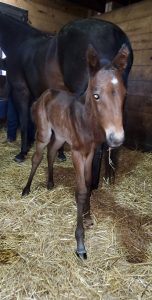 Owned by Darla Gaskin and Stanley Rosenblatt of Anderson and Fort Wayne, Ind., respectively, American Girl completed her nine-year racing career with 54 wins in 203 starts and earnings in excess of $1,000,000. Her best record was recorded in 1:50.3 as a nine-year-old at Dayton Raceway in December of 2018. She was also race timed in 1:49.4 at Harrah’s Hoosier Park in 2016.

American Girl was bred to Downbytheseaside in late April last year. Downbytheseaside, a son of Somebeachsomewhere with a mark of 1:48.3 and earnings in excess of $2 million, stands in Ohio. His first foals will be two-year-olds in 2020.