Swandre the Giant is now an older brother. His dam, Adagio, had a healthy baby boy Saturday, Jan. 25, 2020. The colt was born with a brown tone to his coat and a white star. 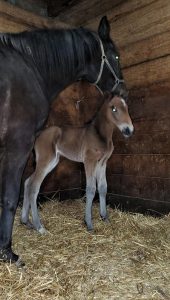 Swandre the Giant’s full brother out of Adagio was born Saturday, Jan. 25. The Swan for All colt is doing well at the Ruddick Stables in southern Indiana. Photo by Harold Ruddick

The new foal, who was born at the Ruddick Stables in Scipio, Ind. at 2:30 in the morning is a full brother to standout Indiana trotter Swandre the Giant. Later in the day after the new Swan for All colt was born, Swandre the Giant was being honored at the annual Indiana Standardbred Banquet in downtown Indianapolis at the Indiana Roof Ballroom. Swandre the Giant took home honors as the state’s top three-year-old trotting colt for 2019.

The newest member of the Adagio broodmare family is the fourth foal from the Valley Victor mare, who took a mark of 1:57 during her racing career and earned in excess of $216,000. She is owned by Rudy Hershberger of Ohio and is under a current lease by Stacey Ruddick through 2021.

Besides Swandre the Giant, Adagio has produced two fillies by Donato Hanover, one of which is a broodmare herself. Adagio’s daughter, Donagio, has a two-year-old filly in training in 2020 by Cornaro Dasolo, who stands in Canada.

Swandre the Giant is by far the star of the family. The dark brown horse by Swan for All now has 15 wins in 28 career starts and is among the fleet of horses trained by Ron Burke. Now four, his career best time of 1:51.3 was taken last year at The Meadowlands and he has career earnings in excess of $655,000, $400,000 of which was earned at three. His new brother will be a hot commodity at the yearling sales next fall.

The foal out of Adagio was the second one born in 2020 for the Ruddick Stables. Their first of the year arrived Jan. 18 and was a black filly by Swan for All out of the mare Just a Valley Gal. The filly is the seventh foal from the Valley Victor mare and the first Indiana sired foal of the group. The Ruddick Stable will continue to be very busy this spring during foaling season.