Island of the Sea, the former Indiana champion, put his skills to the test Thursday, Jan. 13 with a win in the $27,500 Blue Hen Open. Driven by George Napolitano, the Always a Virgin five-year-old scored the win in 1:51.0. 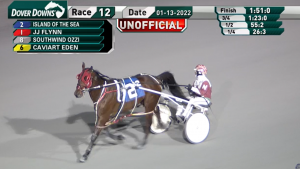 Starting from post two, Island of the Sea was the first leader out of the gate but quickly relinquished his spot to race favorite Southwind Ozzi, driven by Tim Tetrick. Southwind Ozzi opened up on the field with open lengths through fractions of :26.3, :55.2 and 1:23.0. In the final turn the outer flow stalled, forcing those in the back to move three wide, but it also gave Island of the Sea the opportunity to move out for the stretch drive.

Island of the Sea paced home in :27.3 and took over the top spot midway through the stretch, winning the event by three-quarters of a length. JJ Flynn and Allan Davis moved up for second over Southwind Ozzi, who maintained ground for third.

Island of the Sea is now owned by Eric and Lisa Ell of Maryland. Eric Ell also trains the gelding, who was bred by Steve Schmucker. It was the first win of the year in his second start for Island of the Sea, who now has 15 career wins. His earnings tally now tops $189,000 with his personal best time taken as a three-year-old at Harrah’s Hoosier Park in 1:48.4.

Island of the Sea was acquired by the Ells in the spring of 2019. Shane Bowermaster handled the training duties while the horse raced in Indiana during the 2020 racing season before switching to the Dylan Davis barn. He made the move to the East Coast to race following his three-year-old campaign in Indiana.

Island of the Sea was initially a $46,000 yearling purchase from the Hoosier Classic Yearling Sale. He is one of six foals of racing age from the mare Trinity Islands, who took a mark of 1:50 during her racing career. She has also produced standouts such as Franco, an Indiana sired son of Rockin Image who has a mark of 1:49.1 and earnings in excess of $350,000 and is still racing. She has two other foals with marks of 1:51 and change, including Joeythewarhorse and Someislandsomwhere, both by Somebeachsomewhere.