Three solid favorites swept the Indiana Sires Stakes first leg for three-year-old colt and gelding pacers. All miles were comparable with Island of the Sea picking up the quickest mile in 1:49.3. 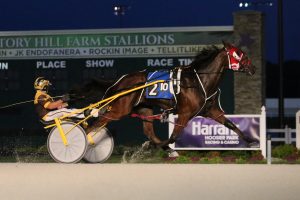 Island of the Se and Michael Oosting earned a new lifetime mark in the first round of Indiana Sires Stakes action Friday, July 3. Photo by Dean Gillette

Hailing from the Shane Bowermaster Stable, Island of the Sea and Michael Oosting had an inside post and kept close early on as The Candyman Can and Sam Widger set the first fraction of :26.4. By the half, Island of the Sea and moved out and taken over with a strong hold on the lead heading into the stretch. The Always a Virgin gelding hit another gear, pacing home in :26.2 for the win by one and one=half lengths over Odds on Osiris and Peter Wrenn, who closed in for second with a :25.3 final panel. The Candyman Can finished third.

Owned by Eric and Lisa Ell of Maryland, Island of the Sea is now three for four this season. The latest time of 1:49.3 was a new career best. Overall, he is now five for seven with two seconds and has earnings of $48,000. Island of the Sea was bred by Steve Schmucker of New Haven, Ind.

Other Indiana Sires Stakes sophomore pacing colt winners included Caribbean Escape and John DeLong in 1:50.0 for trainer Dean Gillespie and Frontier Rollo and Oosting from the Tom Simmons barn in a time of 1:50.2.

Later on in the card, Little Rocket Man recorded the quickest mile of the season thus far, stopping the timer in 1:48.1 using a final panel of :25.4 to earn the new career best time. Incredible Shark and LeWayne Miller finished second and Beckham’s Z Tam and Ricky Macomber Jr.finished third. The top three finishers had times under the 1:49 mark.

Driven by Trace Tetrick, Little Rocket Man is owned by Russ Beeman and Jack Freeman and trained by Missy Essig. The Rockin Image four-year-old is now two for three in 2020.