Island of the Sea is quickly establishing himself as one of the top three-year-old colts and geldings in Indiana this season. The Always a Virgin gelding rolled home to a convincing win Friday, June 26 at Harrah’s Hoosier Park, stopping the timer in 1:50.4 in the first division of the $20,000 Star Destroyer. 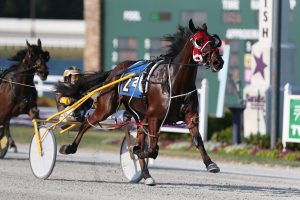 Island of the Sea and Michael Oosting are two for two at Harrah’s Hoosier Park this season, including a win in the Star Destroyer Friday, June 26. Photo by Dean Gillette

Driven by Michael Oosting, Island of the Sea got a spot behind Rogerthat Bluechip and John DeLong from the gate and followed through the first fraction of :27.2 before moving out and taking over. From there, his speed began to increase. In the stretch, he turned in a final panel in :26.4 to win by three and one-half lengths over Rogerthat Bluechip. Always and Again and Trace Tetrick finished third.

Owned by Eric and Lisa Ell, Island of the Sea is now two for two this year at Indiana Grand. He was one of the first of the season to dip below the 1:50 time barrier, taking a new career best time of 1:49.3 last week. Shane Bowermaster trains the impressive sophomore.

The Star Destroyer also showcased the three-year-old fillies with Priceless making her first start of 2020 a winning one. Trained and driven by Brandon Bates, the Rockin Image filly went out for the lead but was joined by Foxy Rigger and Trace Tetrick to the first quarter in :26.0. From there, Priceless led the way and got a breather in the middle of the race before powering home in :27.2 to hold off Sweet Filly and Michael Oosting for the win in 1:52.0. Foxy Rigger finished third.

Priceless is owned by Kevin Miller and Bert Hochsprung of Illinois. She is now eight for 12 in her career with her mark of 1:50.2 taken last year as her career best.

Another impressive returnee from 2019 was Little Rocket Man and Tetrick in the $12,500 Four-Year-Old Pace. Going nearly gate to wire, the Rockin Image gelding was a winner by six and one-quarter lengths in 1:49.3. Tellmeaboutit and Oosting was second over Bro and Matt Krueger for third.

Little Rocket Man is owned by Russ Beeman and Jack Freeman and trained by Missy Essig.

Keystone Tenacious and Sam Widger took home the title in the $28,750 Diamond Final in a time of 1:51.4. The duo scored the win by four and one-quarter lengths over Big Sky Hanover and DeLong. Upfront and Gone and Bates finished third.

Keystone Tenacious, a five-year-old son of So Surreal, is owned and trained by Robert Neiheiser Sr. He is now one for one in 2020.