The Indiana Sired Fair Circuit (ISFC) made its last stop Friday, Sept. 4 at the Shelby County Fairgrounds to determine the finalists for the Governor’s Cup Series 2020 at the Indiana State Fairgrounds. The races are slated for Thursday, Sept. 10 beginning at 11 a.m. 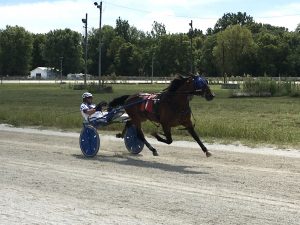 J S Siesta Tan was the first of five winners on the card for the team of driver Alex Udell and trainer-owner Jack Myers. Photo by Tammy Knox

The big winner on the day was the team of Alex Udell and Jack Myers. They scored five wins on the card, which also placed both of them atop the standings for top driver and trainer, respectively of the ISFC in 2020. Coming into the racing program, Udell, Doug Rideout and Mike Peterson were all tied for leading driver. Udell scored five wins on the day over Rideout, who had four and Peterson, who had two. Those three, coupled with Joey Putnam, who also had five wins, dominated the 21-race card, winning 16 races.

Udell’s first win of the day came in the seventh race, the second division of two-year-old filly trotters. J-S Siesta Tan came into the day as the top point getter in her division and sealed the deal with a win in 2:05.0. The Guccio filly rallied gate to wire, trotting home in :29.2 for the victory. Molly’s Joan and Lester Raber closed well for second on the outside of Blitz Babe and Michael Detweiler for third.

Owned by Jack Myers Racing and trained by Myers, J-S Siesta Tan moves to the Governor’s Cup Final with eight wins in nine starts this season. Her career best time remains at 2:02.4 taken at the Indiana State Fairgrounds in early August.

A big winner on the day was Big Gulp for the partnership of Michael, Anna, McKenzie and Ben Yoder of Shipshewana and Goshen, Ind. The Always a Virgin freshman pacer moves to the Governor’s Cup Series final a perfect eight for eight. His quickest time this summer was taken at the Indiana State Fairgrounds in early August in 1:53.0. Jay Cross drives and trains the talented two-year-old.

This Kit Rocks is the top point-getter in the two-year-old colt and gelding pacing ranks. The Rockin Image gelding, trained by Joe Putnam and driven by Joey Putnam, has six wins in 12 starts with four seconds and one third, only missing the board once in his career. He leads the standings with 406 points over Big Gulp in second with 357 points. This Kit Rocks was a winner Friday in 2:00.1.

Putnam also has the top point getter in the two-year-old pacing filly ranks with Sleazy Rolls, who also had a win Friday at Shelbyville in 2:03.3. Also trained by Joe Putnam, the daughter of Time to Roll leads the standings with 368 points over Always a Miracle with 332.

Two-year-old trotting colts and geldings will be led into the Governor’s Cup Series Championships by Jessies Outlawed, who has 334 points over Major Hooligan with 319. J-S Siesta Tan leads the way among freshman trotting fillies with 383 points over Spell Cuteypie who heads to the final with 271.

In the three-year-old ranks, Fast Freddy Jo Jo is in the top spot with 330 points over Topville Rustler, who has 281. The top sophomore pacing filly is Baby Lets Roll with 383 points over Tropical Tracey who has 332. J-S Ivan the Great is the top three-year-old trotting colt finalist with 347 points compared to stablemate J-S Jasper with 306. Both head into the Governor’s Cup Series Championships off wins at Shelbyville for Udell and Myers.

Just for Us, owned and trained by Bonnie Mattingly, leads the standings for three-year-old filly trotters with 297 wins over J-S Miss Ruby. Just for Us was a winner Friday at Shelbyville in 2:04 flat with Charlie Conrad at the controls.