The Indiana Sired Fair Circuit (ISFC) returns to Converse Fairgrounds Wednesday, June 16 and Thursday, June 17 for the third round of action in 2021. A total of 15 races are slated for Wednesday, with two-year-old pacing fillies taking center stage to kick off the event followed by sophomore trotters. 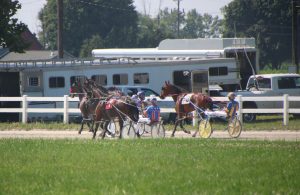 ISFC Track Photographer Diane Shuler snapped this photo of a race heading to the gate during the first round of action at Converse the first week of June. Photo by Diane Shuler

Rockin Bambi and Terry Skinner are featured in the first race of the day for freshman pacing fillies. The Rockin Image daughter is currently two for two, winning both her previous ISFC appearances at Converse and Corydon. Rockin Bambi starts from post five in the six-horse lineup.

Another two-year-old off to a great start is Velstraightdreamer and Kevin Lambright, who go for win number three in her third career start. The Straight Shooting filly starts from post five in the second race of the day, the second division for pacing fillies.

Pure Silky and Doug Rideout lead the way in Race 3. Also going for their third straight win in their third start, the Tellitlikeitis filly starts from post one in the third race.

Luckychris, the standout two-year-old colt from the Curtis Rice barn, is featured in the first division of pacing freshman colts. The Luck Be Withyou colt starts from post two in the seventh race of the day with Clifton Bell in the bike.

Racing begins at Converse at 4PM Wednesday. The ISFC returns Thursday for the second day on the agenda. The second card will feature freshman trotters along with sophomore pacers. The 13-race card also begins at 4 p.m.