The Indiana Sired Fair Circuit (ISFC) is pulling into the homestretch with three locations left this year before the Governor’s Cup Championships at the Indiana State Fairgrounds in early September. Several two-year-olds are starting to emerge as front-runners for a spot in the finals, and many of them are entered in the 25-race program at Converse Tuesday, Aug. 25.

Always a Miracle, trained and driven by Matt Rheinheimer, has five wins in six starts this year. The two-year-old daughter of Always a Virgin picked up a career best time during a qualifier at Harrah’s Hoosier Park in 1:57.4. She will be featured in the third race of the day from post one. 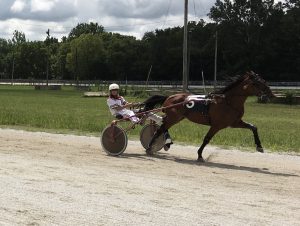 Spell Cuteypie and Lester Raber are multiple race winners in 2020 on the Indiana Sired Fair Circuit. They are working toward a spot in the Governor’s Cup Championships in early September. Photo by Tammy Knox

Always a Miracle will meet some fierce competition from Sleazy Rolls, another filly with five wins already this season. The Time to Roll freshman filly from the Justin White barn has only finished back of second once in eight starts. Joey Putnam will drive from post five in the third race.

Putnam will also be in the bike behind two-year-old colt pacing standout This Kit Rocks. A son of Rockin Image, This Kit Rocks has four wins in nine starts this year. His quickest time was recorded at the fairs in 1:58.4. Joe Putnam trains the homebred colt, who has drawn post six in the fifth race of the day.

Another major contender in the two-year-old colt and gelding pacing division is Big Gulp, trained and driven by Jay Cross. Big Gulp, a son of Always a Virgin, is a perfect five for five this year. His quickest time was taken at the Indiana State Fairgrounds in 1:53.0.

Big Gulp will meet up with another strong contender in Ultimaroca in the afternoon’s sixth race. The Rockin Image freshman from the Charlie Conrad barn has five wins in seven starts. Big Gulp starts from post two while Ultimaroca begins from post six on the second tier.

Switching gears to trotters, Spell Cuteypie comes into Converse with four wins in seven starts this year for trainer-driver Lester Raber. The Guccio filly has a best time of 2:05.4 on the ISFC. She starts from the second tier in post six in the seventh race.

J-S Siesta Tan will look for win number six in her seventh start this year. Trained and owned by Jack Myers, the Guccio filly has a best time of 2:02.4 taken at the Indiana State Fairgrounds. Alex Udell drives from post one in the eighth race.

Another standout two-year-old filly is Miss Greenbacks, trained and driven by Doug Rideout. The Big Stick Lindy filly has four wins in seven starts with a best time taken in qualifying action at Hoosier Park in 2:00.1. Miss Greenbacks has drawn post two in the ninth race.

In the two-year-old trotting colt and gelding ranks, Jessies Outlawed, also from the Rideout barn, will seek his sixth win of the year in his ninth start. The best time for the Jailhouse Jesse son is 2:02.2 taken at the Indiana State Fairgrounds. He starts from post four in the 11th race.

The team of Myers and Udell also have a pair of freshman trotting colts that have multiple wins this season. J-S Hopscotch (Race 10, Post 7) and J-S Swan Returns (Race 12, Post 6) will both look to add their fourth win to their credentials at Converse.