The Indiana Sired Fair Circuit (ISFC) will make it’s second stop on the second chance circuit Tuesday, Aug. 24. The one-day program includes 16 races on the card with every class having at least two divisions with the exception of the three-year-old filly pace. 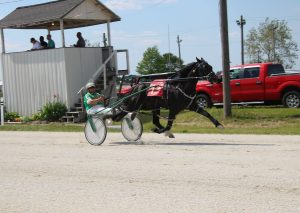 Frontier Metis and Charlie Conrad will be seeking another win on the ISFC Tuesday, Aug. 24 at the Shelby County Fairgrounds. Photo by Diane Shuler

A field of six will vie for the top points in the ISFC in the 10th race of the day for sophomore pacing fillies. ER Sheila brings in the most purse earnings and the most wins so far. Hailing from the Eash Racing Stable, the three-year-old daughter of Shadyshark Hanover took a mark of 1:55.0 earlier this year at Harrah’s Hoosier Park. She will look to score her third win of 2021 from post three.

Joining ER Sheila as a major contender is Townline Lorna from the John Merkel barn. The Time to Roll three-year-old has one win taken at Harrah’s Hoosier Park in 1:54.3. Townline Lorna starts from post two with Michael Detweiler driving.

Joining Frontier Metis and Vel Letsroll South is Babes Shooter to round out a trifecta of winners in the race. Trained by Carl Newland, Babes Shooter has a mark of 1:56.0 from Harrah’s Hoosier Park. The Straight Shooting colt will be driven by Jordan Ross from post two.

The second division will be led by My Little Buddy and Clay Craib. The I Can Only Imagine colt, trained by Scott Linville, is the only winner in the division, taking a mark of 1:56.3 earlier this year on the ISFC. He begins from post five in the five-horse lineup.