The Indiana Sired Fair Circuit (ISFC) will hold its next session at the Jay County Fairgrounds in Portland, Ind. Wednesday, July 7. A total of 17 races are slated to begin at 11 a.m. 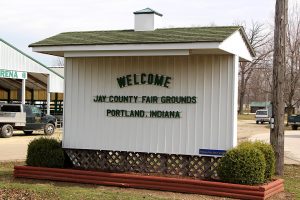 Two-year-old filly pacers will kick off the program with two divisions followed by two divisions of two-year-old colt and gelding pacers. Featured in the second division is Caches Miracle from the Donna Loney barn. The Aracache Hanover colt has four wins in six starts this season with his best time recorded at 2:01.0 at Converse in mid-June. Logan Loney will drive the colt from post one in the five-horse lineup for owner James Reed of Crestwood, Ky.

The fifth race of the day will feature the first division of two-year-old trotting fillies with Dover Dance competing on her home track. Owned and trained by Greg Runyon, the Dover Dan filly is four for four this season on the ISFC. Jay Cross has the assignment to drive from post three behind the standout filly. Her quickest time so far is 2:06.0.

Another standout freshman trotting filly with local ties to Portland is Crescent Beauty, who is five for six in 2021. The Crescent Fashion trotter has won five of six races this season for trainer-driver Doug Rideout with her fastest time recorded in 2:06.0 at Frankfort. Julie Rideout and Peter Schmucker Jr. own the filly, who was also bred by Schmucker.

Switching to three-year-olds, Swan Fine Lady from the Mervin Schmucker Stable will go for win number seven this year. The Swan for All sophomore has only missed the board seven times in 19 starts this season. Her best time of 1:59.4 was taken at Northfield Park earlier this season. The filly went winless as a two-year-old and has done a complete form reversal at three. Jordan Ross will drive the talented filly from post two in the 14th race on the card. Rocking Meadows Stable of Grabill, Ind. owns Swan Fine Lady.