A total of 22 races will be featured at the Clinton County Fairgrounds in Frankfort, Ind. Saturday, Sept. 7 as the Indiana Sired Fair Circuit (ISFC) is back in action. The program, which was originally scheduled with a 1 p.m. start time, has been moved up to Noon to accommodate the large number of races. Included in those races are a trio of tough fillies from the Doug Rideout barn. 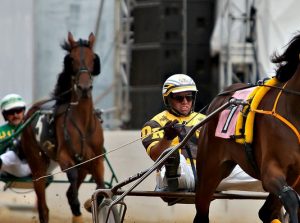 Driver-Trainer Doug Rideout has three tough two-year-old trotting fillies that will be part of the 22-race program at Frankfort Saturday, Sept. 7. Photo by Dean Gillette

Kicking off the day will be three divisions of two-year-old filly pacers. Rigginswind and Rock It Out, each of which have five wins this season, will meet in the second division. Rigginswind starts from post three with Matt Rheinheimer while Rock It Out begins from the second tier in post seven for driver Clifton Bell.

In two-year-old colt and gelding pacing action, Fast Freddy Jo Jo will be featured in the first of three divisions in Race 4. The Time to Roll gelding has earned six wins in 12 starts this season for trainer Larry King. Mike Peterson will drive from the outside of the first tier in post five.

A two-year-old filly trotter that has come into her own in recent races will head a field of six in the first division of freshman trotting fillies. Just For Us, trained by Bonnie Mattingly and driven by Charlie Conrad, will look to add another win onto her card. She has only missed the top three once in 10 starts this year. Just for Us has drawn post four and will face undefeated Quality in Motion from the Rideout barn. The Jailhouse Jesse filly is two for two this year and just started her career in mid-August in Ohio. She makes her second start on the ISFC circuit at Frankfort.

Quality in Motion will join stablemates Nampara and Sleeping Judy, who will compete in the second and third divisions of the two-year-old trotting fillies. Both have multiple wins this season and will be driven by Rideout.