The Indiana Sired Fair Circuit (ISFC) got underway Friday, June 4 at Converse Fairgrounds with a double header of action. The Thursday program was postponed due to rain, creating an entire day of racing for the first session of the ISFC.

In the morning session, two-year-old pacers were featured with the quickest mile of the day going to Luckychris, representing first crop sire Luck Be Withyou. Trained by Curtis Rice, Luckychris used his post one to his advantage and took over from the start to set fractions of :32.0, 1:02.0 and 1:32.0. Around the final turn, Luckychris began to open up on the field, pacing home in :28.2 for the 13 and one-half length win in 2:00.2 with Clifton Bell in the bike. Topville Rocknluck, another son of Luck Be Withyou, and Mackenzie McDonald finished second. Riggins Revenge and Terry Skinner rounded out the top three.

Owned by D and R Racing Stable of Kentucky, Luckychris was bred by Cletus Christner, also of Kentucky. It was the first career start for the colt, who was a $5,000 purchase at the Hoosier Classic Yearling Sale last fall. 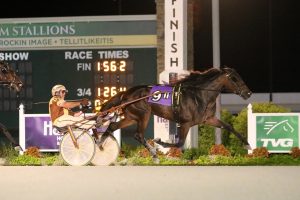 Queen of All, shown winning last year at Harrah’s Hoosier Park with Doug Rideout, turned in an impressive win at Converse during the first round of the ISFC in 2021. Photo by Dean Gillette

The first session was completed by three-year-old trotters, and Queen of All who has returned at three with an impressive stride for a five-length win for driver-trainer Doug Rideout. After starting from the second tier, the Swan for All filly had to move to the lead after everyone got settled at the quarter in :32.1. Queen of All continued to lead the way before drawing away from the field in the stretch with a final panel in :29.1. Swartz Bros Susie and Joey Putnam finished second followed by Salty Ki Ki and Mike Hollenback for third in the 2:03.2 mile.

Queen of All is owned by Julie Rideout, Peter Schmucker Jr. and Glider Stables. Marlin Eash bred the filly, who now has two career wins. Her career best time was taken last year at two at Harrah’s Hoosier Park in 1:56.2.

The afternoon session started off with freshman trotters and a win by another product of a first crop sire in the first race. Crescent Beauty and Doug Rideout scored the gate to wire win in 2:11.0. Julie Rideout and Peter Schmucker Jr. own the Crescent Fashion filly, who is a homebred by Schmucker.

Another first crop sire, Dover Dan, had a few winners on the card, including one of the quickest miles of the two-year-old ranks. Dover Dance, owned and trained by Greg Runyon, put together a gate to wire effort for the win by three lengths in 2:07.0. Rainbows Dream and Jay Cross finished second over Vel Mrs Swanderful and Mike Peterson for third.

Dover Dance, bred by Richard Fry, was a $7,500 purchase by Runyon at the Blooded Horse Sale last August.  The mile marked her first career start.

The fastest mile of the day was recorded in the very last race, which was the 31st event of the day. Driver Charlie Conrad guided Frontier Metis to a win in 1:57.3 for trainer-owner Mike Hollenback. The JK Endofanera gelding had pressure on the outside early, but held steady on the lead throughout for the two and one-half length win. EL’s Rocker and Mike Peterson finished second while Rigged Account and Jordan Ross finished third.

Frontier Farms bred Frontier Metis, who now has two career wins. The mile was just a tick off his career best taken last year at Harrah’s Hoosier Park in 1:57.2.

ISFC action continues at Corydon next Thursday and Friday.