A total of eight Indiana Sired Fair Circuit (ISFC) Championships are slated for Saturday, Oct. 5 at the Shelby County Fairgrounds. First post is 11 a.m. with two-year-old filly pacers kicking off the action in the first race. 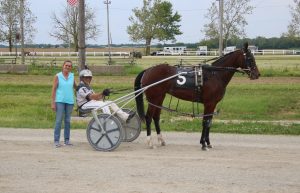 ER Harper Rose, driven by Don Eash, is shown winning at Converse earlier this year. Alice Allen, breeder of Riggins, the sire of the filly, is also pictured. Photo by Diane Schuler

ER Harper Rose, who has been consistent all season, has drawn post one for trainer-driver Don Eash. The Riggins filly has won six races and finished second five times in 15 starts. Her best time of 1:58.3 was taken at Portland a few weeks ago. Her biggest challenger could be another product of Riggins as Rigginswind and Matt Rheinheimer will start from post four. The Curtis Sumpter trained filly also has six wins in 15 starts with a best time of 1:59.0 also taken at Portland on the same racing program as ER Harper Rose.

Moving to the two-year-old filly ranks, hometown favorite Just for Us, trained by Bonnie Mattingly, will try to take the top spot in the third race on the card. She has amassed seven wins in 13 starts and is currently on a five-race win streak. The Guccio filly has only missed the top three once in 13 starts this season. She starts from post three. J-S Miss Ruby and Alex Udell will join Just for Us in the hunt for the title from post two. They have scored six wins this year in 15 outings and have the best career mark of the field of 2:03.2.

A big matchup will take place in the two-year-old colt and gelding trotting ranks as Kazans Power (post two) and Pop Secret (post four) meet up. Both freshman trotters, trained by Justin White, have won nine races this season with Kazans Power showing the quickest record in 2:01.2. Stablemates Kazans Power and Pop Secret are both listed with Joey Putnam to drive for the final.

The quickest bunch of the day falls on the three-year-old colt and gelding pacing final listed as race six. Several multiple winners will line up behind the gate including Hayswood Ron, who has six wins and six seconds in 21 outings this year. The He’s Gorgeous sophomore, trained by Larry King, was race timed earlier this year in 1:54.4 at Harrah’s Hoosier Park and recently lowered his record to 1:58.4 at Frankfort. Hayswood Ron will be driven by Mike Peterson from post four in the final.

Sophomore colt and gelding trotters will polish off the day with a post time of approximately 12:45 p.m. Leading the way into the final is Dance Hall Brawler from the Joe Putnam barn. The Mr Cantab gelding has six wins this season and comes into the final off a win at Corydon. Joey Putnam is named to drive from post two.