In conjunction with two of Emmis Communications’ FM radio stations, 1070 The Fan and B105.7, the Indiana Standardbred Breed Development Program has launched three fun, yet educational videos, highlighting the Indiana Sired Fair Circuit and harness racing in Indiana. 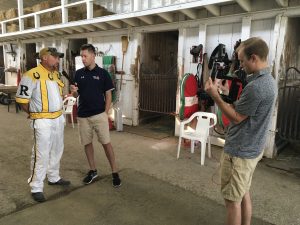 1070 The Fan’s “Sean in the City” interviews Matt Rheinheimer during the first round of harness racing at the Indiana State Fair in June as part of a new promotional initiative by the Indiana Standardbred Breed Development. (Photo by ISBD)

The three videos, which feature personalities from the two sister stations, were released as part of a marketing campaign spurred by the Indiana Horse Racing Commission’s aim to promote grassroots horse racing in the Hoosier State.

In the first video, 1070 The Fan’s “Tony at the Track” visits a different kind of racetrack when he learns more about harness racing at the horse racetrack. Tony D interviews drivers Matt Rheinheimer and Jordan Ross to learn the intricacies of harness racing, followed by speaking with program coordinator Rachel Klotz to learn more about what goes into organizing the Indiana Sired Fair Circuit. (Video: https://youtu.be/8FgmJdE5hg0)

The second video pits the boys from 1070 The Fan’s “Espresso” as they get firsthand experience of harness racing. Joey Mulinaro and Ben Polizzi take a trip around the Indiana State Fairgrounds’ historic one-mile dirt track in two-seater carts, then try their hand at calling a race with help from veteran race caller Rick Upell. (Video: https://youtu.be/55CJb8MbPfI)

And, finally, B105.7’s “Sean in the City” shows what happens when a neophyte to horses learns how to bathe a racehorse. (Blog and video: https://www.b1057.com/blogs/sean-city/sean-does-your-job-horse-grooming#//) 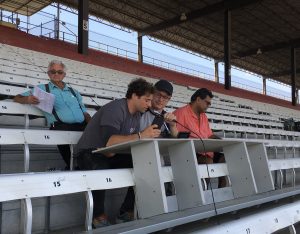 1070 The Fan’s Espresso’s .Joey Mulinaro and Ben Polizzi try their hand at calling a race at the Indiana State Fairgrounds to help promote Indiana Standardbred racing at the county fair circuit. (Photo by ISBD)

The videos are being used to promote a VIP Fan Experience for four to watch the Indiana Sired Fair Circuit State Finals on August 9. Both radio stations will give away a four pack of tickets and parking pass to the Indiana State Fair, VIP seating in the Hoosier Lottery Grandstand for the Finals, a behind-the-scenes tour of the Speed Barns and food and drink vouchers. Listeners are encouraged to register online and the winners will be chosen the first week of August.

“The videos were so much fun to put together, and we really appreciate Emmis, and our drivers and owners for working with us,” says Klotz. “We hope this not only encourages more fans of harness racing at the fair circuit, but of horse racing in general throughout Indiana.”

For more information on the Indiana Sired Fair Circuit, reach out to the IHRC at 317-232-2897 or by emailing Standardbred@hrc.in.gov.