The Indiana Standardbred Association is preparing for the next round of elections for the board of directors. Four directors will be elected in the upcoming election with two districts having two candidates already. Additional nominations are open until September 17, 2021. 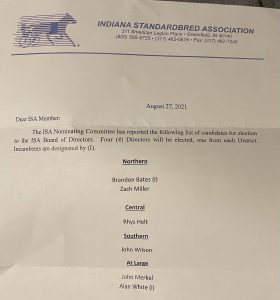 The Indiana Standardbred Association is now accepting nominations for four positions on the board, which will be voted on later this year to begin the term Jan. 1, 2022.

Nominations of candidates are being accepted. Any nomination must be accompanied by a petition in support of the individual with at least 50 paid members of the ISA signing the petition. Nominations and paperwork should be mailed to the ISA Office at 311 American Legion Place, Greenfield, IN  46140.