The Indiana Standardbred Association holds an election annually for open positions on the board. This year, all four districts have two individuals running with one from each elected to fill the spots available on the board. The term for the new directors begins Jan. 1, 2022. 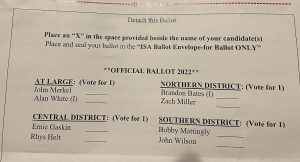 White, who has been a board member for the past five years, currently oversees the ISA publications and website committee. He owns a breeding farm in Fountain City, Ind. and raises many of the horses he races.

Bates has been on the board for one term (3 years) pari-mutuel committee and the publications committee. Located in the northeastern part of the state, he is one of the top drivers at Harrah’s Hoosier Park.

Also running for the At-Large position with White is John Merkel, who is a current horseman stabled at the Shelby County Fairgrounds. Merkel is a longtime trainer in the state and in recent years, served as the ISA Horsemen’s Representative.

Running for the Northern District seat with Bates is Zach Miller, horseman based out of Converse, Ind. He and his wife, Dessa own and operate an 11-horse stable that competes on both the Indiana Sired Fair Circuit and at Harrah’s Hoosier Park.

The other two districts have two brand new candidates for the positions. In the Central District, Ernie Gaskin and Rhys Helt each seek to join the board while in the Southern District, Bobby Mattingly and John Wilson are both looking to represent their district on the board.

Gaskin has been involved in racing his entire life and has been part of the Indiana racing circuit since the early 1990s. He’s served on the Indiana Standardbred Breed Development committee and currently owns and operates Crimson Lane Training Center near Hoosier Park.

Rhys Helt is a third generation horseman who currently resides in Noblesville. His mother, Donna, is a longtime trainer and he currently breeds and raises Indiana sired horses on his farm.

Mattingly is a longtime horseman based at the Shelby County Fairgrounds. He and his wife, Bonnie, race both on the pari-mutuel circuit as well as the county fairs. They own a farm in Manilla, Ind., northeast of Shelbyville.

The final candidate running for the Southern District is John Wilson of Arlington, Ind. He is a longtime educator in the Rush County Schools and has owned and raced horses in the state for the past two and one-half decades.

A complete bio for each of the candidates was recently mailed along with the official ballot for this year’s election. Ballots are due back to an independent firm, Anderson CPA Group of Franklin. Ballots must be postmarked by Friday, Oct. 22. Instructions on how to return the ballots in a special ballot envelope is included with the packet.