The Indiana Standardbred Association (ISA) held its monthly meeting Monday, Feb. 7, 2022 at the office in Greenfield, Ind. A full table of 15 directors were in attendance for the meeting and President Joe Putnam welcomed new executive director Tony Renz to his first meeting with the organization. 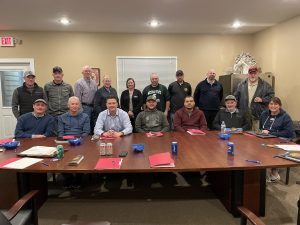 Putnam kicked off the meeting with a report of positive comments from the recent banquet honoring the champions of 2021. He also talked about the arrival of I-Gaming, which will most likely affect wagering and gambling in the state of Indiana in the near future.

“This is something we will need to discuss as a board and get a handle on this,” said Putnam. “We have talked about it lightly in the past, but we need to try to get ahead of it and be part of it.”

Putnam also noted they are in need of a Gator Driver for the upcoming 2022 racing meet at Harrah’s Hoosier Park. Joe Essig Jr., the ISA horsemen’s representative, was in attendance and noted they had three or four different individuals serve in that position last year and it has been an ongoing dilemma to keep it filled. The board will advertise for the position through the Website and will hope to have someone in place before the meet begins in late March.

Randy Hatton reported on the backside health committee and had a proposal for new prescriptions available to horsemen and horsewomen in 2022. He noted the cost had gone done and the personnel in the clinic do a good job in allotting the prescriptions for minor issues. Hatton also noted the clinic personnel has requested to move days for the clinic to Tuesday and Friday in 2022 with the same hours, 8:30 a.m. until 4:30 p.m. He also noted Dr. Jeff McIntyre, the chiropractor, has requested to only be available on Saturdays due to staffing issues. The board agreed to allows one day per week for chiropractic work and adjust hours to better fit the horsemen and horsewomen’s needs, possibly extending hours to 3PM. Hatton noted they would monitor the level of business and if they find a need to increase the hours, they would revisit the availability of Dr. McIntyre.

Sarah Conrad reported on the college assistance program for the spring semester, noting they received 11 applications total with eight for full time students and three for graduate students. She noted an increase for full time students and also noted a clause will be placed on the college assistance application moving forward that money allotted was not guaranteed from year to year and would be based on the number of applicants received.

Membership applications will be mailed out later this week to begin the process of joining the ISA. ISA members will have the opportunity to sign up for various surveys throughout the year and the board will work on a few questions for the surveys at each meeting.

Ernie Gaskin talked about the addition of promotions at the racetrack and fairs and encouraged the board to “take the lead” in developing some promotions during the year. Gaskin noted the success of previous events, including handicapping contests at the Caesars Sportsbook in downtown Indianapolis as well as the success of First Turn Stable in producing new owners. Gaskin hoped they could focus on the on track experience to help people and attendance along with promoting ownership, including the reimplementation of the new owner’s seminars.

“We need to make the present owners feel good and anything we can do to plant seeds for new owners is important,” added Gaskin.

Zach Miller noted he had acquired two new owners from First Turn Stables and attended a dinner for prospective new owners in the clubhouse during racing several years ago. The promotions committee will explore the ideas and work with Tony Renz, who suggested to build a two to three month campaign with hopes of attracting other organizations to join in for the plan.

Putnam also noted information has been released for several important dates coming up. The barn area at Harrah’s Hoosier Park will open March 5 with the first round of qualifiers set for March 9 and the dress rehearsal set for March 23.

Ellen Taylor of the Harness Horse Youth Foundation reported on the success of their activity box program in 2021 and thanked the ISA Board for assisting with getting the information out to 4-H leaders across the state. She also provided a proposal for 2022 to continue with the program, extending it to all FFA Chapters in the state. Each chapter would receive one box, “The Best of the Best” information with 20 different activities.

Taylor also noted for the first time ever, the leadership program for the Harness Racing Youth League would be held at Crimson Lane Farm July 10 – 14, which is for older kids. She has also scheduled a field trip for Westfield Schools at John DeLong’s farm and asked for assistance for a booth at the National FFA Convention in October. The ISA Board unanimously accepted the proposal to assist with mailing boxes to clubs as well as providing the cost for shared booth space at the National FFA Convention.

Other items of business included a note from Sara Conrad about Responsible Gaming and the state’s request for all organizations to be a part of the state campaign for the awareness month in March.  She also noted work to begin on coordinating golf and bowling outings.

John Wilson also noted the bylaws of the ISA need to be looked at and potentially updated. He also asked for the focus of fair racing to be targeted for the actual fair dates at the locations in Indiana and encouraged conversations to be initiated with fair boards.

Finally, the board voted to send Tony Renz to the Dan Patch Awards in Florida at the end of February as a representative of the organization.

Putnam adjourned the near two-hour meeting, noting the next meeting would be held Monday, March 7 at the ISA Offices in Greenfield.