Integrity Stables has seen much success with their class of yearlings from last season and they are prepping 16 more for this year’s Hoosier Classic Yearling Sale. The team behind the farm kick off their consignment with the second horse in the ring when the sale gets underway Friday, Oct. 22. 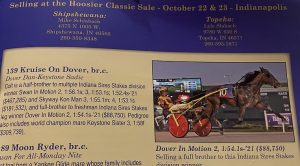 Integrity Stables has several yearlings that will be popular with sale goers during the Hoosier Classic Yearling Sale beginning Friday, Oct. 22.

Calliesfirstflight, a daughter of Tellitlikeitis, is the first yearling to sell for Integrity Stables. The filly, tagged as Hip No. 2, is a first foal from the Somebeachsomewhere mare Calabresa Hanover. The filly has a lot of black type on her maternal side.

Another yearling from Integrity that will garner a lot of attention is Hip No. 139 Kruise on Dover. The Dover Dan colt, selling as Hip No. 139, is a half brother to Swan in Motion, Indiana Sires Stakes standout with a mark of 1:52.4 and nearing $500,000, and a full brother to Dover in Motion, who just won the freshman trotting colt and gelding Indiana Sires Stakes Super Final last week at Harrah’s Hoosier Park.

With several strong trotting entrants, Integrity has a half-sister to Skyway Torpedo (1:55, $200,000) selling as Hip No. 317. The Muscle Massive filly named Tactic Magic is out of the mare The Magic of Paris, who has thrown three winners in three foals. Tactic Magic is also a half sister to Skyway Tinacious, who has a mark of 1:54.3 and more than $140,000 in earnings.

Integrity Stables represents two locations, one in Shipshewana under the direction of Mike Schlabach and Topeka under the direction of Lyle Slabach. The consignment can be viewed in Aisle 19 at the Hoosier Classic Yearling Sale and will be available for pre-sale inspection at the Preview Thursday evening at the Indiana State Fairgrounds.