Indiana Grand Racing & Casino opened the first sports book in the state Sunday, Sept. 1, 2019. The facility, which is part of Winner’s Circle on the casino floor, is a state of the art facility featuring ample seating, viewing areas and a wall of dedicated television space to sports from across the nation. 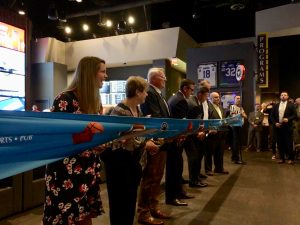 Governor Eric Holcomb placed the first sports wager in the state of Indiana just after Noon followed by a wager placed by State Representative Sean Eberhart. A special ribbon cutting ceremony was then held to officially open the facility for operations. The first public wagers were made shortly before 1 p.m.

Over the course of the next several weeks, additional sports books will open including the one at Harrah’s Hoosier Park named “The Book.” Other facilities tied to horse racing that will open soon with sports wagering include Winner’s Circle Clarksville, Winner’s Circle Indianapolis and Winner’s Circle New Haven. The facilities will be able to accept wagers on a plethora of sports from professional to college level.