Indiana’s champions of 2018 were honored Saturday, Jan. 26 at the annual Indiana Standardbred Association (ISA) banquet. The event, tagged as “25 Years Of Racing Glory,” was held at the Indiana Roof Ballroom in downtown Indianapolis. 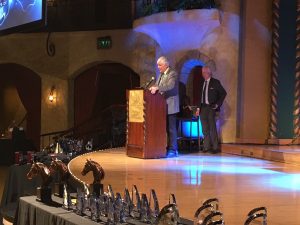 Jack Kieninger thanks everyone for the ISA President’s Award, one of three honors bestowed upon him during the annual awards banquet. (Photo by Tammy Knox)

In addition to all of the equine stars, several individuals were honored, including outgoing ISA President Jack Kieninger. Kieninger was presented with the ISA President’s Award as well as inducted into the Indiana Standardbred Hall of Fame. In a surprise to everyone in attendance, Mike Smith, executive director of the Indiana Horse Racing Commission, presented Kieninger with the prestigious Sagamore of the Wabash award on behalf of Governor Eric Holcomb. 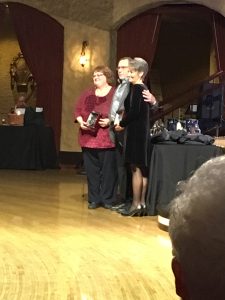 Linda Dever and Pam Cross were presented with the ISA Special Recognition Award for their work on the county fair circuit each season in Indiana. Richard Keaton made the presentation. (Photo by Tammy Knox)

In addition to Kieninger, Senator Luke Kenley was inducted into the Indiana Standardbred Hall of Fame as well as Foxy Maneuver.

For a complete list of award recipients, check out the March 2019 issue of the Indiana Standardbred Magazine.