A total of $2,040,000 is on the line at Hoosier Park Friday, Oct. 12, all dedicated to the rich Indiana Sires Stakes related program. All 14 races are dedicated to the state’s top horses, including eight $220,000 Super Finals for two and three-year-olds on both the trot and the pace. 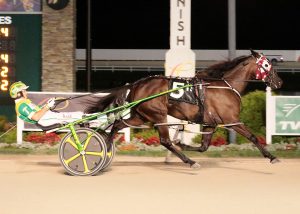 Glorious Virgin and Trace Tetrick established a new track record for freshman pacing fillies Wednesday, Aug. 22 in the $75,000 final for the Indiana Sires Stakes at Hoosier Park. The time was also a new national season’s mark. (Photo by Linscott Photography)

The first Super Final is weighted heavy with horses from the Brian Brown Stable as five of the 12 entrants are trained by Shane Bowermaster, who oversees the Brown Stable string in Indiana. Glorious Virgin leads the way as the race favorite at odds of 8-5 with Trace Tetrick in the bike. The Always A Virgin two-year-old pacing filly has won seven of her 10 starts this season and has the quickest win time of the field in 1:50.4. Glorious Virgin will begin from post five.

Three-year-old filly trotters will follow in the fourth race of the night, placing the spotlight on Custom Cantab from the Chris Beaver Stable. At odds of 7-5, the Mr Cantab winner of nine races this season begins from post six with Peter Wrenn at the controls. 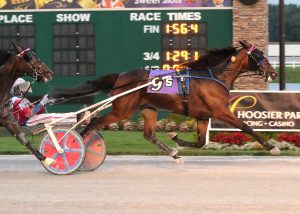 Grand Swan and LeWayne Miller got back to their winning ways Friday, Sept. 28 in an elimination of the Indiana Sires Stakes. The filly, shown here winning earlier this season, had a seven race win streak earlier this summer. (Photo by Linscott Photography)

Two-year-old filly trotters step onto the track after 8 p.m. in the evening’s seventh race with the early spotlight on Grand Swan from post one. The Swan for All filly, driven and trained by LeWayne Miller, has earned eight wins and three seconds in 11 starts this season. She has been tagged the favorite at odds of 6-5.

Voom Or Bang and John DeLong are favored in the three-year-old filly pace at odds of 5-2. The Roger Welch trained Always A Virgin sophomore recently won the $85,000 ISS Final and will be looking for her sixth win of the season in the Super Final.

One of the most popular trotters of 2018 at Hoosier Park will be featured in the ninth race, the $220,000 Indiana Sires Stakes final for two-year-old trotting colts and geldings. Swandre the Giant, now trained by Jimmy Takter, is the overwhelming favorite at odds of 4-5. Yannick Gingras comes in to drive the Swan For All from post eight.

Two-year-old colt and gelding pacers follow in the evening’s 10th race with Outloud and Peter Wrenn tagged as the favorites of the field. The Tellitlikeitis colt has not been worse than third all year long and begins from post two. Outloud is trained by Melanie Wrenn.

Breeders Crown winner Fiftydallarbill is back at Hoosier Park for the three-year-old colt and gelding final for trotters and has drawn post one. Teamed up with Trace Tetrick, the Swan for All colt has been on the road, recently competing in the $434,000 Kentucky Futurity at The Red Mile. Fiftydallarbill is barely favored over rival Katkin American and James Yoder from post five, and the race will be a great matchup for racing fans Friday.

The final Super Final of the night puts the three-year-old colt and gelding trotters on the track in the evening’s 13th race. Always A Prince, winner of 16 of his 19 starts this season and a career best time of 1:48.3, has been chosen as the heavy favorite from post 10. Trace Tetrick will drive the Always A Virgin colt for trainer Tyler George at odds of 3-5.