Several Indiana sired horses were in the spotlight Sunday, May 26 for a special day of racing that included the $100,000 Maxie Lee Invitational for trotters. The field included both Fiftydallarbill and Homicide Hunter, but it was another Indiana sired horse that made it to the winner’s circle. Miss You Big Mike, who was a multiple winner on the Indiana county fair circuit in 2018, picked up his fourth win of 2019 and a new lifetime mark of 1:51.2 in claiming action. 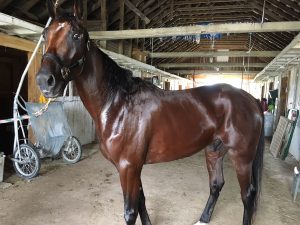 Miss U Big Mike was a major force in the three-year-old ranks in Indiana last year at the county fairs. Now, he’s winning races in record times at Harrah’s Philadelphia.

A son of He’s Gorgeous, Miss U Big Mike was a dominant force in Indiana last year. Trained by Larry King and owned by Funk Racing Stable and Charlie K Racing Inc., Miss U Big Mike and driver Mike Peterson ended his Indiana career with a win in the $20,000 Indiana Sired Fair Circuit Championship at the Indiana State Fairgrounds in early August. He then moved to Yonkers Raceway for his new connection owner Irwin Kaplan and relocated to Harrah’s Philadelphia, Harrah’s Hoosier Park’s sister track, in early May. He is now two for two since moving to Harrah’s Philly under the direction of trainer Carmen Fusco. Marcus Miller has driven Miss U Big Mike to both of his wins thus far at Harrah’s Philly.

Later in the card, Fiftydallarbill and David Miller made a big move around the final turn to finish third in the $100,000 Maxie Lee Invitational. Fiftydallarbill trotted his mile in 1:51.3. Guardian Angel As and Tim Tetrick won the race in a time of 1:51.0. Homicide Hunter, with George Napolitano Jr. in the bike, was also in the race and finished seventh.