ER Skywalker and Morairtime represented the state of Indiana well Friday, Jan. 17 by each getting a win on the card. The two trotters scored victories in the second and fourth races on the card. 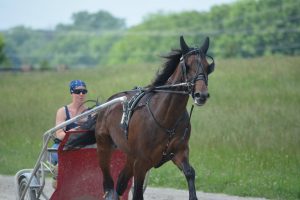 ER Skywalker, shown jogging with Inga Lill Karlsson at the Eash Farm in Greenfield, matched his career best time for his new connections at The Big M Friday, Jan. 17.

Kicking off the night was Morairtime, a four-year-old daughter of Airzoom Lindy. The trotting mare was parked every step of the mile before wearing down the competition in the stretch for the win in 1:53.3 by a nose. Driven by Jack Parker Jr., Morairtime is trained by Carol Jamieson-Parker. It was a new lifetime mark for the Indiana sired trotter, who is now two for three in 2020. She was bred by John Bontrager Jr. of Millersburg, Ind.

ER Skywalker also turned in a gritty performance in the $9,000 conditioned trot, enduring a mile in the outer flow the entire way. Driven and trained by Jordan Derue, the five-year-old Guccio gelding grinded his way to the front and trotted off with the win in 1:57.0, winning by three and one-half lengths. Bred and raised by Don and Rosie Eash of Greenfield,