During the off season of pari-mutuel racing in Indiana, several of the state’s products move to other racetracks and thrive. All About Cowboys is one of those horses who is reeling in wins at Miami Valley Racecourse. 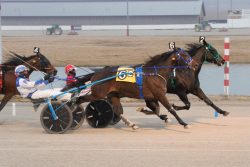 All About Cowboys (inside) earns another victory at Miami Valley in the Open Trot. The Indiana sired son of Swan for All has won two races in 5 starts at the Ohio track in 2019. (Photo by Holton Photo, Miami Valley Racecourse)

A son of Swan for All, All About Cowboys continues to battle in the top trotting class in Ohio, earning another win Sunday, Feb. 17 in the $22,500 Open Trot. Driven by Jason Brewer, All About Cowboys led gate to wire in a time of 1:55.0, holding on for the win by a head over Pine Dream and Chris Page. Monopoly Blue Chip finished third with Kayne Kauffman in the bike.

Trained by Ken Rucker, All About Cowboys has won two of his five starts in 2019, adding to his 15-career win tally and earnings in excess of $185,000. The six-year-old gelding has a career best time of 1:54.0 taken last year at Dayton for owners Green Acres LLC and Mike Klimas of Illinois. Kenneth Chupp of Tuscola bred the Indiana sired trotter who competed in top level conditioned classes at Harrah’s Hoosier Park last year.

All About Cowboys is a half brother to Picky Picky Valor, who also has a mark of 1:54.0 and earnings in excess of $170,000 and races on the Illinois circuit.