The Indiana Horse Racing Commission (IHRC) held their monthly meeting at Indiana Grand Thursday, Oct. 1 with a full agenda of items, many of which included topics for Standardbred racing. Joe Putnam, president of the Indiana Standardbred Association, was in attendance and spoke of the new ownership of Harrah’s Hoosier Park two and one-half months into the partnership with Eldorado Resorts and Caesars Entertainment. 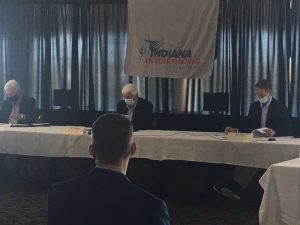 Putnam was the third in line to report to IHRC commissioners on the working relationship with Eldorado Resorts and Caesars Entertainment executives. Brian Elmore, executive director of the Indiana Horsemen’s Benevolent and Protective Association (HBPA), and Paul Martin, president of the Quarter Horse Racing Association of Indiana (QHRAI), both commended Caesars for their work with all three breeds over the past few months. Putnam began by echoing their sentiments followed by some information about the Standardbred industry.

“From a Standardbred point of view, we’ve gotten back to 2019 levels, which isn’t necessarily the case for other tracks in the United States,” said Putnam. “I would agree with the other organizations that working with the current administration has been nothing but positive.”

Commissioner Greg Schenkel commented to Putnam on the recent Governor’s Cup Championships and noted although the plans weren’t able to be executed as initially scheduled, he commended the Standardbred industry for implementing such a good idea and program and hopes to see it build.

Harrah’s Hoosier Park also gave a presentation on Community Giving for the 2020 season, noting big increases in donations, especially to the Madison County area. A total of $953,000 will be allotted between Hoosier Park and Indiana Grand when the year is complete with $448,000 coming from Hoosier Park. Kiersten Flint, vice president of marketing at Hoosier Park, gave the report, noting several big donations touching those locally and in the racing industry, including New Vocations Racehorse Adoption.

Rick Moore gave a brief update on capital spending, noting two items that were replaced on the initial report. Instead of money spent on a generator welder and modulators, Hoosier Park was able to add 40 new 49-inch televisions to the grandstands and a screen track aggregate to track maintenance. They were also able to add new flooring to the Track Kitchen, which had a near-complete overhaul in preparation for the 2020 racing season. The money spent was actually more than the original figure turned in for capital expenditures.

Joe Morris, senior vice president of racing for Caesars Entertainment, provided an assessment of business thus far, and noted they stay in touch with horsemen and horsewomen on a weekly basis for all three breeds. He noted the racing schedule is already agreed upon with the horsemen for 2021 and the agreement has already been signed. Morris also noted that Hoosier Park’s two big nights so far in 2020 have both pulled in more than $1 million in handle and overall, wagering is up about 25 percent. He also noted he is currently working on Draft 6 with the horsemen on the report that will go before the IHRC during the December meeting.

Morris briefly touched on the news this week that Caesars Entertainment is purchasing William Hill. This purchase will allow all sports betting to be consolidated under the Caesars Brand.