Horsemen and horsewomen came together for a wonderful cause at the close of 2018. A benefit dinner and raffle along with live music provided by the Aaron Stutzman Band was held during the Midwest Mixed Sale and the Michiana Classic Yearling Sale the weekend of Friday, Nov. 23 at the Michiana Event Center in Shipshewana, Ind. 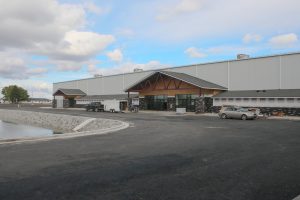 The Michiana Event Center was the site of a fundraiser for three families in late November during the Midwest Mixed Sale and the Michiana Classic Yearling Sale. (Photo by Dean Gillette)

Included on the list of auction items were a 4562 Cruiser buggy, Pennsbury jog cart, and a large Green Egg grill and Silver Rocket grill. Breedings to stallions that were donated and auctioned off included Always A Virgin, Swan For All, Check Six, Dover Dan, Guccio, and Big Stick Lindy, which were auctioned off during the Midwest Mixed Sale earlier that day.

“Thanks to everybody and our appreciation is to all the known and unknown and the guys who took the time to help,” said Miller, who is a breeder and operates his stable under Eden Standardbreds. “Jeff King said he never saw so many people dine out at a benefit before. We have a pretty amazing community and it really humbles you.”

Donations were also accepted for the cause. The Indiana Standardbred Association donated $2,000 to each of the families.

“The fundraiser was the vision of many people involved, including several of the Indiana breeders and horsemen, as well as Steve Cross and myself,” said Jeff Fought, who manages the Midwest Auction Company.  “We are in such a unique area up here where people get behind a fundraiser cause with such great passion.  In the Amish community, benefit auctions and benefit dinners are very commonplace.  So having the sales here in Shipshewana at the Michiana Event Center, where many other benefits are already hosted, it seemed like a no brainer.”

Other major contributors to the event included Black Creek Farm, who provided the grilled chicken for the event.  Fought hopes to make the benefit part of the rotation for the Midwest Auction Company and Michiana Classic Yearling sales each season to assisted families related to the Indiana Standardbred community.