The Indiana Standardbred Association has announced that the 2020 Indiana Stallion Directory is in the mail. The booklet includes all stallions currently standing in the state of Indiana for the 2020 breeding season. 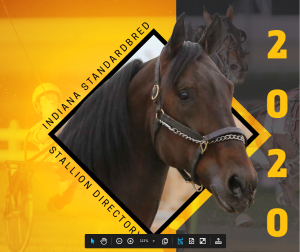 The 2020 Indiana Stallion Directory will be arriving in homes in the next week.

Included on the cover is a new stallion Check Six, who stands at Ivy Lane Farm. The seven-year-old son of Somebeachsomewhere wowed local fans with several wins at Harrah’s Hoosier Park, including the 2017 Dan Patch Stakes where he picked up his career best time of 1:48.1. In all, Check Six earned in excess of $1.6 million and won 19 races over a four-year period before retiring to stud. He is entering his second year at stud and bred 99 mares last season at Ivy Lane Farm.

The Stallion Directory has become a valuable tool for owners and breeders as they look over the options for their mares in the state of Indiana. Several new stallions will be offered in the state in 2020 including Freaky Feet Pete, who is also standing at Ivy Lane Farm.