The 2022 Indiana Sires Stakes kicked off a special night of racing for Memorial Day Monday, May 30. A total of 13 races were on the holiday card featuring 12 divisions of three-year-olds on both the trot and the pace. 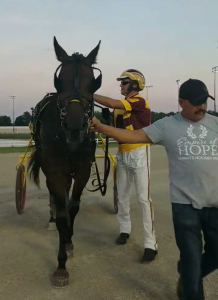 Driver Ricky Macomber Jr. hangs up the lines on Dover in Motion after recording a new career best in the gelding’s first start of 2022 in Indiana Sires Stakes action Monday, May 30.

One of the most anticipated returns of the evening was that of 2021 Two-Year-Old Trotting Gelding of the Year Dover in Motion, who dominated in his sophomore debut. The Dover Dan son got away sixth on the outside and driver Ricky Macomber Jr. decided to move onto the top, completing the first half in :56.3 before drawing away from the field. Past the three-quarters in 1:24.3, Dover in Motion was full of trot and Macomber had his hands full of speed. The gelding coasted to a five and one-half length victory in 1:52.4, a final quarter in :28.1. Sweet Boy Ben and Sam Widger finished second over Chucky Tady and Brandon Bates for third.

It was the first start of 2022 for Dover in Motion after turning in three qualifiers. The time of the debut was a new career best for the talented gelding, who moved his career bankroll over the $335,000 mark. With only one defeat at two, Dover in Motion now stands at nine for 10 lifetime. Dover in Motion comes into 2022 with a new partnership behind him. He was retained by M & M Racing and is now co-owned by Macomber Racing. Lyle Dean Slabach of Topeka, Ind. bred the gelding who was a $50,000 purchase from the Hoosier Classic Yearling Sale under the name Kwik Kramer. He was the fourth highest seller from the first crop of Dover Dan. Dover in Motion is the fastest and richest foal by Dover Dan to date.

Another impressive performance was recorded by Ponda Warrior from the Jay Hochstetler barn. The sophomore son of Rockin Image rounded the seven-eighths mile oval in 1:49.1, a final panel in :26.1. Soaring Now and Andy Shetler finished second one and one-quarter lengths back over Thunder Country and John DeLong for third.

Ponda Warrior, driven by Jimmy Whittemore, was the favorite, paying $3.20 for the win. He is owned by Hochstetler, Finkelberg Racing LLC and South of the Tracks Rac Inc. Pond-A-Acres bred the three-year-old colt.

Matching the win time of Ponda Warrior was JK Victory and Trace Tetrick, winning their division in 1:49.1. The JK Endofanera gelding, a half brother to Little Rocket Man, used the same tactics with a wire to wire performance. Rip Wheeler and Brandon Bates finished second over Big Law and Sam Widger for third. JK Victory is trained by Ron Burke and owned by 3 Brothers Stables and Caviart Farms. Victory Hill Farm Inc. bred the swift gelding.

The fastest filly of the night was Always Gonna B You, driven by John DeLong. A daughter of Always a Virgin, the filly sat patiently in the two hole as Hedda Hopper and Brandon Bates cut fractions of :26.0, :55.0 and 1:22.1 before moving out and around for the win in 1:49.4. She was a one and one-quarter length winner over Jewel’sbewithus and Trace Tetrick and Goo Goo Won and LeWayne Miller for third.

Another standout from the two-year-old ranks last year was M-M’s Dream, who also won her division in 1:54.4. Driven by Sam Widger, the Swan for All filly moved first up around the final turn and crossed the wire with broken equipment for the win in 1:54.4, a final panel in :27.0. Swan Trixie and Peter Wrenn finished second over Sassy Babe and Charlie Conrad for third.

M-M’s Dream is trained by Henry Graber Jr. for Eleven Star Stables, Frank Baldachino and Hillside Stables. It was her first start of 2022 and she is now seven of nine lifetime with earnings nearing the $300,000 mark. The mile was also a career best for M-M’s Dream.