The rich Indiana Sires Stakes action kicks off its 2019 season Wed. May 29 at Harrah’s Hoosier Park featuring two divisions of the $48,000 Three-Year-Old Filly Trot. Carded as races nine and 12 on the 14-race program, the first division brings back a favorite from last season. 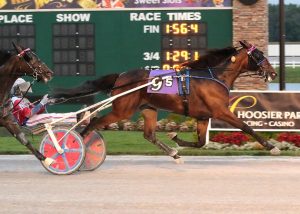 Grand Swan, trained and driven by LeWayne Miller, has drawn post one in the ninth race. The Swan for All daughter makes her first start of 2019 after winning two qualifiers this month. Grand Swan won eight of 12 starts last season with three seconds, only missing the top two once. Her best time was 1:55.0 taken as a two-year-old. She has been set at odds of 7-2 for owners Grand Swan Racing, Go Fast Stable and Never 2 Late Stable, the second choice on the board.

Measuredperfection, trained by Ron Burke and driven by Ricky Macomber, has been tagged as the early morning line favorite at odds of 8-5 from post seven in the nine-horse field. Measuredperfection, also by Swan for All, won her first race of 2019 at Harrah’s Hoosier Park. She will try to add to her four wins as a two-year-old for owners Burke Racing Stable, Frank Baldachino, J & T Silva-Purnel and Libby, and Weaver Bruscemi.

According to the Indiana Standardbred Breed Development, a new format for Indiana Sires Stakes will be rolled out this year. Six legs will be offered for two-year-olds with a $250,000 Super Final while three-year-olds will compete in eight legs before a $250,000 Super Final. In all, a total of $8.5 million will be paid out in the ISS program compared to $7.8 million in 2018. ISBD also reports that a total of 718 nominations for two-year-olds were collected, an increase from last season.