Virgo and Trace Tetrick turned in an impressive second half to score a comfortable win in the $57,235 Fox Stake Wednesday, Aug. 12 at the Indiana State Fairgrounds. The 94th edition of the race attracted a field of 11 two-year-old pacers as part of the Grand Circuit stop. 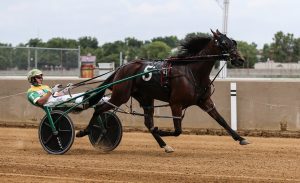 Virgo and Trace Tetrick were on cruise control in the Fox Stake Wednesday, Aug. 12 at the Indiana State Fairgrounds. Photo by Dean Gillette

Virgo got away in mid-pack as Railin’ Jennings and Michael Oosting established the time for the first quarter in :27.2. By the halfway mark, JK Going West and LeWayne Miller had taken over the top spot before Rogers Image and John DeLong took their turn on top of the race.

Virgo had begun closing in around the turn and at the top of the stretch, he had a straight shot to the finish line. The Always A Virgin gelding rallied home in :28.1 to win by five lengths in 1:52.0. JK Going West finished second over TJ’s Indy Pacer and Sam Widger, who moved into third.

Virgo is owned by Howard Taylor, Jeff Billings and Dylan Davis. Davis trains the freshman pacer, who is now three for four in his career. His best time to date was recorded last week at Harrah’s Hoosier Park in a time of 1;51.4. With the win in the Fox Stake, Virgo now has in excess of $52,000 in career earnings.

Virgo was bred by Dustin Miller of Kendallville, Ind.  He was a $13,000 yearling purchase from the Hoosier Classic Yearling Sale last fall.

Another impressive two-year-old was in the winner’s circle Wednesday as Brookview Bullet scored another win. The Always a Virgin gelding, driven by Tetrick, scored a gate to wire win in the $20,677 Hoosier Stake No. 84 for freshman pacing colts and geldings. Owned by Eleven Star Stable and trained by Justin White, Brookview Bullet scored the win in 1:52.3.

Brookview Bullet is now two for two in his brief career. He earned a new lifetime mark in his racing debut at Harrah’s Hoosier Park at the end of July in 1:52.2, winning by eight lengths. Brookview Farms of Shipshewana, Ind. bred the gelding. He was a $12,500 purchase at the Hoosier Classic Yearling Sale.

Tetrick scored wins in seven of the 11 races on the card at the Indiana State Fairgrounds.  He added two more wins to his daily total at Harrah’s Hoosier Park later that evening.