Fresh off the heels of two freshman fillies (Priceless and May Baby) advancing to the prestigious $6 million Breeders Crown finals Friday, Oct. 25 and Saturday, Oct. 26, two more older trotting mares will vie for the big money next week. Custom Cantab and Hannelore Hanover finished third and fourth in their elimination and have qualified for the final for older trotting mares. 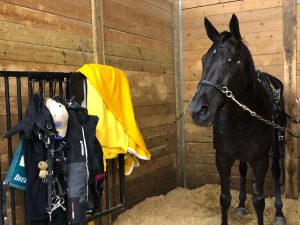 Hannelore Hanover is no stranger to competing in the Breeders Crown. The Swan for All mare will seek the title in the $325,000 final Sat. Oct. 26. Photo by Dean Gillette

Custom Cantab rolled out to the lead and established fractions of :27.3, :57.0, and 1:26.1 for driver David Miller before horses began to close in. At the wire, the four-year-old daughter of Mr. Cantab was defeated by three-quarters of a length for third. Hannelore Hanover and Yannick Gingras closed well late in the race to finish fourth, trotting her final panel in :26.2. The Swan for All mare and Custom Cantab both trotted their miles in 1:53.3.

Both mares will meet once again Saturday, Oct. 26 in the $325,000 final. Post positions were drawn at the conclusion of the second of two elimination rounds for the division. Hannelore Hanover starts from post six while Custom Cantab will begin her journey from post nine.

Earlier in the evening, Trainer Jeff Cullipher also had a qualifier from his barn as Grimmie Hanover, driven by Corey Callahan, finished fourth. Grimmie Hanover rolled out to an early lead to post the first fraction of :28.1 before being overtaken at the half by eventual winner The Ice Dutchess. Grimmie Hanover, owned by Cullipher and Pollack Racing, will start from post eight in the $600,000 final for three-year-old trotting fillies Sat. Oct. 26.