Indiana was well represented in the winner’s circle at The Meadows Friday, Jan. 10 as three Indiana sired horses took home wins on the night. Invincible, Hoosier Paco and Enoch all scored wins on the 13-race program. 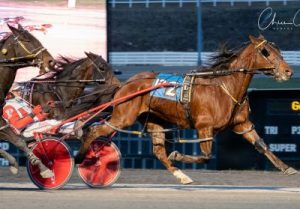 Enoch, shown winning with Dave Palone at The Meadows last season, scored his first win of 2020 Friday, Jan. 10 at The Meadows. Photo by Chris Gooden

The card began with a win from Invincible in the first race. The six-year-old son of Jailhouse Jesse, driven by Dave Palone, went right to the lead in the $7,000 conditioned claiming event and held off challengers for the win by one-half length in a time of 1:57.3. Owned by Calvin Hoover, it was the first start and the first win of the year for Invincible, who now has in excess of $41,000 in earnings. The Lester Beechy-bred gelding also recorded a new lifetime mark with his win in the race for trainer Kelly Paver.

Hoosier Paco was the next Indiana sired horse to pick up a win in the $9,000 conditioned race. Driven by Brady Brown, Hoosier Paco sat the in the pocket until the stretch and rolled away for the win in 1:57.0 for trainer Spencer Kahrig. The 10-year-old Yankee Valor gelding, bred by Hoosier Standardbred Farm, was also making his first start of 2020 for Kahrig Stables. He increased his career bankroll to more than $250,000 with the victory.

The final Indiana sired win came later in the card as Enoch of the Ron Burke Stable turned in a commanding gate to wire effort for the win by two lengths in a time of 1:52.2 in the conditioned race with a purse of $12,700. Owned by the familiar partnership of Burke Racing, Weaver Bruscemi, Philip Collura and Frank Baldachino, Enoch was also making his first start of the new year with driver Palone at the controls. The seven-year-old Panspacificflight gelding has in excess of $225,000 in earnings and a career best time of 1:49.1. He was bred by Alvin Walther and is out of the good Indiana sired race mare Kieanna’s Angel, who is by Personal Power. She earned a mark of 1:53.1 and more than $134,000 during her racing career for Walther and competed in Indiana Sires Stakes. With just three foals, she is the dam of two with earnings of more than $100,000 with Enoch joining Rockin TJ as her two standout sons.