GD Western Joe, the Indiana sired son of Real Desire, scored the win in the featured $18,400 Open Pace at Hollywood Gaming Dayton Saturday, Dec. 12. Driven by Chris Page, the five-year-old veteran pacer stopped the timer in 1:50.2 for the win. 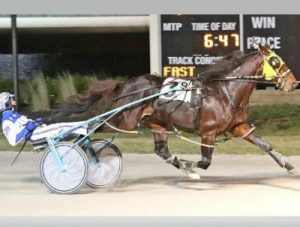 A slight favorite over Tellmeaboutit, GD Western Joe paid $4.40 for the win. He is trained by Ron Burke and owned by the partnership of Burke Racing Stable, Hen-Shaut Stable, J & T Silva-Purnel & Libby and Weaver Bruscemi. He was bred by Gerald Yoder in Indiana.

Earlier in the card, Indiana sired Fox Valley Hustler was a winner in claiming action. The three-year-old gelded son of Time to Roll followed along in the two-hold behind Rock N Randy V and Chris Presley until he popped out to challenge at the three-quarter pole. From there, driver Brett Miller had Fox Valley Hustler in full gear, winning by five lengths in 1:52.3 as the favorite of the field. Colin N Down and John DeLong finished second over MG Kid and Shawn Barker II for third.

It was one of six wins on the card for Miller, who leads the standings at Hollywood Gaming Dayton. The meet goes through the end of the year.