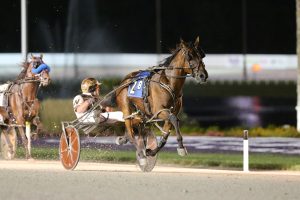 Odds on Osiris, 2019 Indiana Pacer of the Year, won his 2020 return during qualifiers at Harrah’s Hoosier Park Saturday, June 6. Photo by Dean Gillette

Kicking off the afternoon card was Odds on Osiris, driven by Peter Wrenn. The Rockin Image gelding found a seat right behind Sawyer’s Desire and Ricky Macomber through most of the mile as fractions of :28.3, :59.3 and 1:27.4 were displayed on the board. In the stretch, Wrenn tipped Odds on Osiris out and he paced home in :25.4 for the three and one-quarter length advantage over Sawyer’s Desire in a time of 1:53.3. Hes Rockin Ralphie and John DeLong finished third.

Owned by Odds on Racing, Odds on Osiris was making his first start of 2020. He completed his freshman campaign with nearly $350,000 and a mark of 1:50.3, winning seven of 10 starts for trainer Melanie Wrenn. Merlie Schwartz of Peru, Ind. bred the gelding, who was purchased from the Hoosier Classic Yearling Sale under the name Swiss Rocket for $60,000.

Later in the card, old-timer Bridge to Jesse’s was impressive in his qualifier with a win in 1:52.4. Driven by John DeLong, the seven-year-old Jailhouse Jesse gelding rallied out to the lead with a first quarter in :27.1 before Bluebird Reverend and Sam Widger took over to lead the way through the half and three-quarters in :56.1 and 1:25.4. In the stretch, the two trotters matched each other stride for stride for a while before Bridge to Jesse’s pulled away for a two and one-quarter length advantage, turning in a final panel of :26.4. Two O B Wonkenobi and LeWayne Miller finished third.

Owned by William, Patrick and Ray DeLong along with trainer Roger Welch, Bridge to Jesse’s is a multiple Indiana sired champion. The reigning aged trotting champ enters his sixth season of competition with more than $940,000 in earnings and 42 wins in 91 career starts. His best time of 1:51.1 was taken last year at the age of six at Harrah’s Hoosier Park.

Other Indiana sired winners on the day included Steppin Hurry, a four-year-old Rockin Image gelding from the Missy Essig barn, who won in 1:53.2 with Brandon Bates in the bike. Trotter Muscular Babe, a five-year-old Guccio mare from the Brett Wilfong Stable, was a winner in 1:55.0 for Sam Widger while four-year-old Straight Shooting gelding Gazing Star, trained by Luis Quevedo, won in 1:52.4 for Widger.