As most of the world was tuned in to honoring the best in the motion picture business at the Oscars, the world of Standardbred racing was tuned in to the 2018 Dan Patch Awards at the annual United States Harness Writers Association (USHWA) banquet held in Orlando, Fla. Sunday, Feb. 24. The event was broadcast live on Facebook with Heather Wilder and Heather Vitale providing the coverage. Roger Huston and Jason Settlemoir served as event emcees. 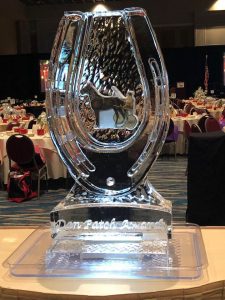 The Standardbred industry honored the best of the best during the annual USHWA Dan Patch Awards Sunday, Feb. 24 in Orlando, Fla. (Photo by Judy Wilson)

McWicked took home the top honor of the night, awarded the 2018 Horse of the Year. The seven-year-old, who was also named Pacer of the Year, is the oldest horse to ever achieve the honor.

Indiana had a few ties to the evening. Verlin Yoder’s Woodside Charm received the overwhelming vote for 2 Year Old Trotting Filly of the Year.  Homicide Hunter, the world’s fastest trotter ever and an Indiana sired son of Mr Cantab, was named Older Trotter of the Year.

One of the biggest events of the night came when warhorse Foiled Again made a surprise appearance at the event. Foiled Again walked into the banquet room in front of several hundred people who immediately got their cell phones out to record the moment. The Dragon Again gelding was forced into retirement after his last start Dec. 31, 2018. The now 15-year-old completed his career with more than $7.6 million in career earnings and 109 wins in 331 starts.

The evening was complimented by a silent auction of racing memorabilia up for grabs with event goers. All proceeds from the auction benefitted the Harness Horse Youth Foundation.