The Indiana Horse Racing Commission recently approved the plan from the Standardbred Breed Advisory Committee and Standardbred Advisory Board at their December meeting. Noted in their presentation as the biggest challenge was how to address the increase in funding the program will see from the addition of table games to Harrah’s Hoosier Park beginning Jan. 1, 2020. The organizations agreed to revisit the topic after a few months of table games operations although reserves have afforded the groups to boost several programs in 2020. 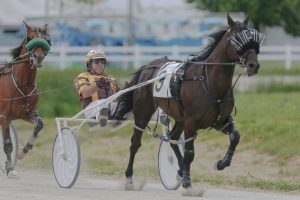 The 2020 racing program for Indiana sired horses will see a boost in several areas, including the ISFC Championships. Photo of Cherokees Gorgeous and Doug Rideout by Dean Gillette

The 2020 projected revenue for Standardbred racing in the state of Indiana is more than $13.8 million with funds combined from slots revenue, breakages and outs and budget reserves. An additional $498,000-plus will be utilized for promotions and administrative expenses.

Several changes and additions were implemented in 2019 with great success. More than $8.8 million was paid out in purses, which was an increase of more than $1 million paid in 2018. The 2020 proposal includes six legs for two-year-olds in Indiana Sires Stakes action with a $250,000 Super Final while three-year-olds will compete in eight legs leading up to a $250,000 Super Final. Both two and three-year-olds will see an addition of $25,000 consolations. The proposal also includes $100,000 for rounding of legs and boosting of purses in legs with 11 starters.

For the Indiana Sired Fair Circuit (ISFC), the championship races will see an increase from $20,000 to $25,000 and the consolations will be bumped up to $10,000 from $8,000 for the first series. Also, an overnight race will be added at each fair for each gait and age during the first series. Also, $500 will be awarded to sixth, seventh and eighth place finishers in the Series 1 Championship races. Horses nominated to the fair program will be eligible with a purse of $1,000 plus entry fees, which will be $25 per horse. Points toward the ISFC Championships will not be awarded on overnight races.

A total of 23 racing programs will be offered for the ISFC in 2020. Elite races will see an increase from $5,000 to $7,000 per race. Once again, a total of $800,000 will be paid out for breeder’s awards. Breeders Awards will be paid on an annual basis at the completion of the last race meet in Indiana.

Indiana sired late closers will see a boost to $850,000. This includes 14 series run throughout the season at Harrah’s Hoosier Park.