The Hochstetler Racing Stable, managed by Homer and Jay Hochstetler and Matthew Tumolillo and Terry McKibbin, currently has a full roster of two-year-olds in training. Included on the list is a freshman son of Tellitlikeitis named All On Red, Find Your Magic, a two-year-old trotting colt by new sire Class Included, and Sister Jean, a two-year-old filly by Swan for All. The stable also includes several returning sophomores such as Act of Faith, a trotting filly by Swan for All, and General Doug A, a son of Tellitlikeitis who won a leg of the Indiana Sires Stakes last year. 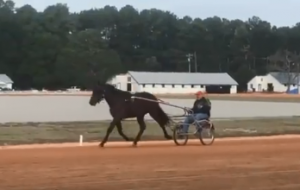 Find Your Magic and Homer Hochstetler get some training in at Pinehurst in anticipation of the 2020 racing season. Photo by Jay Hochstetler

Find Your Magic, pictured with trainer Homer Hochstetler, is a homebred out of the Kadabra mare Magic Affair. The filly is only one of 14 registered two-year-olds by sire Class Included, whose oldest foals are now four-year-olds.

All on Red is also a homebred from the Hochstetler family, owned and bred by Ada Jean Ackerman. The Tellitlikeitis colt is out of the mare In the Red, a Ponder mare who is also the dam of full brother General Doug A, now three. General Doug A took a mark of 1:53.3 at Harrah’s Hoosier Park last year, only starting three times.

Other Indiana-related prospects can be found in the The Dave Jannone Stable, who has a three-year-old Mr Cantab gelding in training. Bentley Blu had two qualifiers last year at The Meadows but will be seeking his first career start later this year.

The Dreamville Stable, which is managed by trainer Mike Keeling, Paula Wellwood and Halbert Kearns, includes a three-year-old Swan for All filly named Swan Bomb. The Brad Komers Stable include a two year old filly named Always A Spinster by Always a Virgin, and the Brad Kramer Stable has two-year-old pacing colt Rightthererightnow, who is by Rockin Image.