There was only one Jerry Landess and anytime one thinks about Indiana Standardbred racing, Jerry Landess was included in the conversation. The longtime native of Portland, Ind. passed away Tuesday, Oct. 13 at the age of 90. 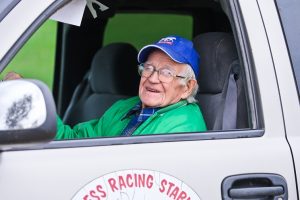 Landess was also a standout boxer, winning the Golden Gloves in Muncie, Ind. in 1947 and 1948. While serving in the military, he also fought for the US Army team. His boxing career spanned eight years with 124 wins in approximately 150 fights.

Landess became involved with racehorses at the Jay County Fairgrounds and drove his first horse, Butternut, in 1948 at Bourbon, Ind. His stable was formed in 1950 and competed from coast to coast. He was Indiana Driver of the Year 20 times and won 1,980 recorded career races with more than $2 million in purses. Many of his wins were not included in that tally as they happened prior to 1976 when the U.S. Trotting Association began keeping comprehensive records. A series, “The Jerry Landess” has been held for more than two decades at Harrah’s Hoosier Park in his honor.

Landess drove many champions over his career, including the great Abercrombie, who he trained early in the superstar’s campaign. Some of the more notable horses he steered later in his career included Margie’s List, Nat’s Diamond Head, Touch Score, and Mary’s News Girl. Later, he drove and trained Primetime Ranger to 27 wins and more than $300,000 in earnings with a mark of 1:54.3 taken in 2002. Landess last drove in a Gentlemen’s Race Free for All at the Celina Fair in Ohio in 2014.

Landess earned many accolades over the years. He was a member of the Standardbred Board of Regulations for 19 years, director of the Indiana Trotting and Pacing Horse Association for 14 years, speed superintendent for the Jay County Fair for 13 years and served as a director of the U.S. Trotting Association for 28 years. He received the Sagamore of the Wabash in 1985 from Gov. Robert Orr and received a second award in 1991 from Gov. Evan Bayh. He was inducted into the Indiana Standardbred Hall of Fame in 1991 and was the first recipient of the Indiana Horseman of the Year award in 1975.

Landess is survived by his wife of 61 years, Mary, one son, Gary Landess (Shirley) of Indianapolis, one daughter, Lisa Reyes of Portland, one sister, Martha Moyer (Jim) of Greensburg, two grandchildren and three great grandchildren along with several nieces and nephews.

He was preceded in death by his son, Jimmy Landess, brother Gene Landess and grandson Jerry Day.

Private family services will be held with burial at Green Park Cemetery in Portland. Arrangements are being handled by Baird-Freeman Funeral of Portland. Memorials may be made in Landess’ honor to the Jayland Trotting Association. Online condolences are being collected at www.baird-freeman.com.