Two Indiana horses kicked off the Thursday, Feb. 25 racing program at Pompano Park, winning the early double. Beachboydesire was followed by Sand Sniper to the winner’s circle in the first two races.

Beachboydesire and David Miller were favored in the first race, getting the early lead from the center of the pack and leading the way through fractions of :27.4, :55.1 and 1:23.3. In the stretch, plenty of horses had the opportunity to challenge but they could not make up any ground on Beachboydesire, who was a winner by two and one-quarter lengths. Prescotts Hope and Rick Plano finished second over Oreo Dream Xtreme and David Ingraham for third in the 1:52.4 mile. 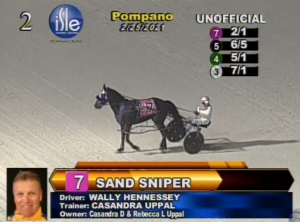 Now six, Beachboydesire is owned by J M F Racing LLC of New Jersey and trained by Jason Merriman. The Real Desire gelding was claimed out of the event by owner Cleunice Nantes. Beachboydesire leaves the Merriman Stable with two wins in eight starts this season. He has only missed the top two twice this year. In all, he has 15 wins in 104 starts and earnings over the $80,000 mark. His latest win just missed his career best time by two ticks, which was set at age four in 1:52.2 at Dayton Raceway.

In the second race on the night, Sand Sniper had a similar route to the winner’s circle. Guided by Pompano’s leading reinsman Wally Hennessey, Sand Sniper rolled out to an early lead and never looked back, setting fractions of :27.3, :57.0 and 1:24.3. He opened up on the field by two in the stretch for the win in 1:53.3. Art Nukem and Mike Simons finished second over Get Lit and Rick Plano for third.

Sand Sniper paid $6.20 for the win. The five-year-old son of Sand Shooter is owned by Casandra and Rebecca Uppal of Middletown, Ind. Casandra also trains the gelding, who earned his second win of 2021 in nine starts. He took a new career best mark earlier in February in 1:51.4 and now has nine wins in 50 career starts with earnings in excess of $44,000.